On the Black Confederate Front

Why African Americans will never accept the black Confederate myth: “If, for example, one managed to change the curriculum in all the schools so that Negroes learned more about themselves and their real contributions to this culture, you would be liberating not only Negroes, you’d be liberating white people who know nothing about their own history. And the reason is that if you are compelled to lie about one aspect of anybody’s history, you must lie about it all. If you have to lie about my real role here, if you have to pretend that I hoed all that cotton just because I loved you, then you have done something to yourself. You are mad.” — James Baldwin, “A Talk to Teachers” (1963) 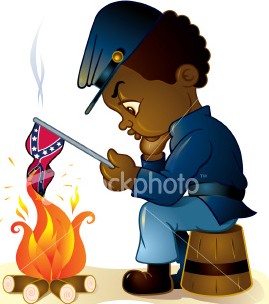 Here are a couple of updates that I thought you might find interesting.  The Fredericksburg Free Lance-Star published my response to a recent editorial by Calvin Crollier and Kevin Crowder.  The paper decided to title it, “Black Confederate Soldiers? In Your Dreams“, which I thought was kind of funny.  In a little over a week I will travel to Richmond to take part in the annual meeting of the Association For the Study of African American Life and History.  I will take part in a panel organized by Emmanuel Dabney, titled “Black Confederates in the Civil War: History, Myth, Memory, and Make-Believe”, which will also include Ervin Jordan and Jaime Martinez.  I recently learned that C-SPAN will cover the conference so there is a chance that you may be able to catch this at some point.  This should be a lively session.

My co-authored article with Myra Chandler Sampson on Silas Chandler is getting closer to publication in Civil War Times.  I mentioned earlier that we are very excited to be included in the magazine’s 50th anniversary issue.  We recently secured permission to use the famous image of the Andrew and Silas Chandler.  It looks like The History Detectives episode about Silas and Chandler will air during the second weeks of October.  Check your local listings.  Finally, my book project is moving along, but rather slowly.  I have to finish a few other writing assignments before I can really hit the ground running with the research and writing.