Why Florida Seceded From the Union 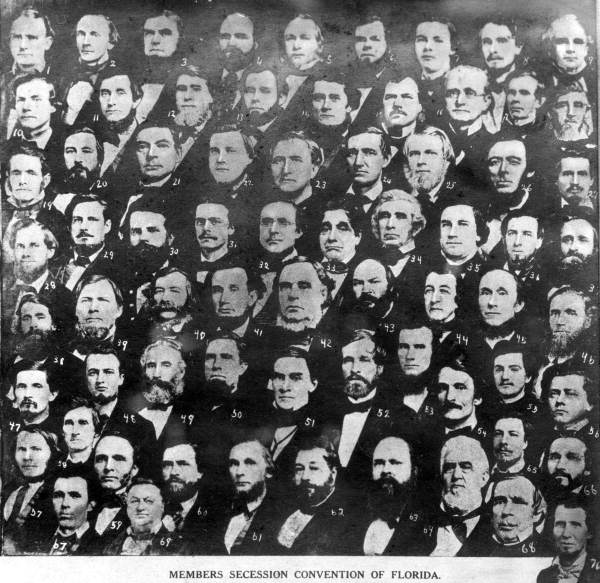 On this day in 1861 the state of Florida formally seceded from the Union.  A number of the secession conventions issued “declarations of causes” to explain why they decided to sever ties with the United States, though at the time Florida chose not to publish its statement.  The unpublished document was recently discovered in a Florida archives. [h/t to James Epperson]

By the agency of a large proportion of the members from the non slaveholding States books have been published and circulated amongst us the direct tendency and avowed purpose of which is to excite insurrection and servile war with all their attendant horrors. A President has recently been elected, an obscure and illiterate man without experience in public affairs or any general reputation mainly if not exclusively on account of a settled and often proclaimed hostility to our institutions and a fixed purpose to abolish them. It is denied that it is the purpose of the party soon to enter into the possession of the powers of the Federal Government to abolish slavery by any direct legislative act. This has never been charged by any one. But it has been announced by all the leading men and presses of the party that the ultimate accomplishment of this result is its settled purpose and great central principle. That no more slave States shall be admitted into the confederacy and that the slaves from their rapid increase (the highest evidence of the humanity of their owners will become value less. Nothing is more certain than this and at no distant day. What must be the condition of the slaves themselves when their number becomes so large that their labor will be of no value to their owners. Their natural tendency every where shown where the race has existed to idleness vagrancy and crime increased by an inability to procure subsistence. Can any thing be more impudently false than the pretense that this state of things is to be brought about from considerations of humanity to the slaves.

It is in so many words saying to you we will not burn you at the stake but we will torture you to death by a slow fire we will not confiscate your property and consign you to a residence and equality with the african but that destiny certainly awaits your children – and you must quietly submit or we will force you to submission – men who can hesitate to resist such aggressions are slaves already and deserve their destiny. The members of the Republican party has denied that the party will oppose the admission of any new state where slavery shall be tolerated. But on the contrary they declare that on this point they will make no concession or compromise. It is manifest that they will not because to do so would be the dissolution of the party.

I agree with Gordon Rhea that white Southerners in the Deep South made themselves perfectly clear as to why they believed secession was their only recourse following the election of Abraham Lincoln.  There is no reason why we shouldn’t take them at their word.