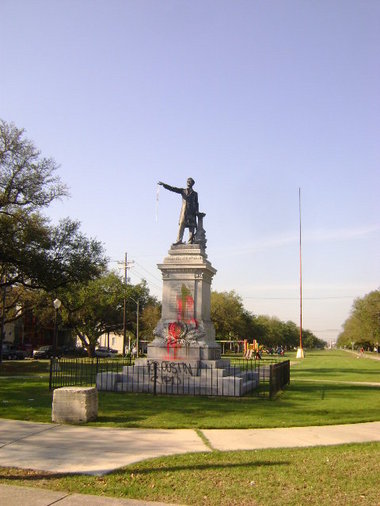 Outrage over the shooting death of Trayvon Martin last month in Sanford, Florida can now be seen in the form of graffiti on Civil War monuments in New Orleans.  It should come as no surprise.  Monuments to both Robert E. Lee and Jefferson Davis were spray painted with the names of Martin and two other local African American men, who recently died as a result of violent clashes with city police.  The spray painted names are themselves a form of memory, but the use of the Davis and Lee monuments add meaning that go far beyond confronting random graffiti on the side of a building.

Irregardless of whether the graffiti can be traced to the black community, the act itself serves to remind the surrounding community that this violence is perceived to be racial in nature.  The use of these particular monuments not only points to the history of racial tension in the community, but to the institutions themselves that were responsible for creating these public spaces and largely responsible for legally enforcing inequities within the public sector.  The damage to these structures reflects a sense of alienation from the community and a rejection of the community’s values as represented in these monuments.

Finally, and perhaps most interestingly, the decision to deface these particular monuments reflects the extent to which memory of the Civil War has been eclipsed or shaped by our collective memory of the civil rights movement.  It is likely that the perpetrators of this act know very little about Davis and Lee, but they know enough to connect them to the history of race in the United States during the past 150 years.  That is clearly a recent development.  The appropriation of the meaning of these sites as stamped with a history of racial injustice is itself an attack on the values and preferred Civil War memory of previous generations.

It is unlikely that the monuments will be cleaned in time for the “Final Four” showdown this weekend.  That’s OK for at least one person:

Pastor Shawn Anglim of First Grace United Methodist Church has a different take on the graffiti that has focused on the controversy surrounding the meanings.“Right now, it’s a need for conversation. And whether done in proper way or not, maybe it’s OK it’s up for a week or so. And it gets some people talking a little bit,” Anglim said.

If only we knew how to talk about such things.

Next post: A Progressive Attempts to Understand Robert E. Lee