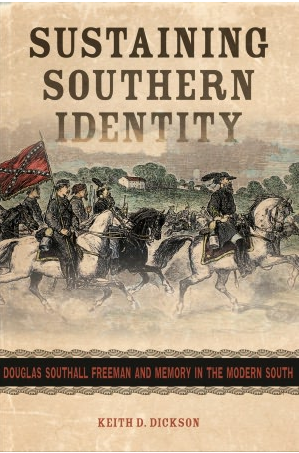 I am about half-way through and thoroughly enjoying Keith D. Dickson’s new book, Sustaining Southern Identity: Douglas Southall Freeman and Memory in the Modern South

(Louisiana State University Press, 2012).  It’s not a conventional biography of Freeman; rather, the book explores the influence of the Lost Cause and his father’s military service in Confederate ranks on Freeman’s view of history as well as how his own scholarship (“Memory Framework”) worked to bridge the divide between the antebellum world of his father and the New South.

What I am finding most interesting about Freeman is his close identification and involvement with the southern progressive movement in Richmond.  My only complaint about Dickson’s analysis of progressivism and its emphasis on taxation reform, public education, and public health is that he traces it back to Reconstruction rather than the Readjuster Movement of the 1880s.  In the wake of the Readjuster Movement, Democrats learned to co-opt as much of their political platform that would bring about the necessary reforms without upsetting the region’s delicate racial hierarchy.

Freeman’s writings helped to unite white Virginians around shared stories and values rooted in the past even as they embraced new political and social policies that deviated from those of their predecessors.  While I’ve read Freeman’s biography of Lee and Lee’s Lieutenants, I never connected him with anything having to do with the progressive movement, which I suspect has to do with my observation that those who most closely identify with him today lean to the conservative side.  The book has definitely helped me to better understand how Freeman applied his professional training in history at Johns Hopkins University to the broader goal of anchoring his community’s modern tendencies in a shared past.

So, how is it that a progressive like Freeman was able to write what many conservatives today believe to be the most accurate and unbiased interpretation of Lee?  🙂