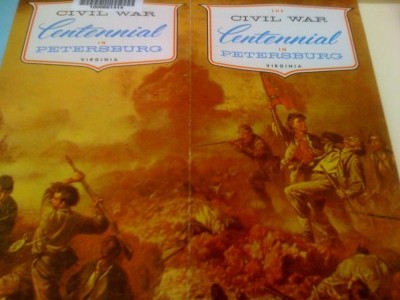 File this one under the ‘better late than never’ category.  I guess every historian has experienced uncovering a gem of a reference that failed to make it into a published work.  The following editorial (“Our Colored Militia”) was published in the Petersburg Lancet on September 12, 1885 by George F. Bragg, Jr. on the occasion of a local black militia parade.

When we think of the achievements  of those brilliant knights of the middle ages; when we think of the christian armies moving onwards to Jerusalem to wrest the tomb of the blessed Saviour from the fierce barbaric hands of Saracenic hosts; when we remember the courageous conduct of the Negro troops at Fort Fisher, Fort Wagner, at New Orleans and at the CRATER near our own city, in which the limbs of may of our brethren in black lie mouldering in the dust from which they came, we may feel that this gathering to day is not an idle insignificant one, but that the colored militia men of this grand old State have determined to perpetuate the memories of that institution from which so many healthy lasting benefits have been derived.

There were a number of black militias active throughout Virginia during the postwar period.  Though their service was limited they performed an important function within the local black community by reinforcing civic pride and preserving a memory of the war that was slowly losing its hold on the public’s imagination by the late nineteenth century.  This editorial reinforces just how important it was for African Americans to keep alive the memory of their service and sacrifice in the war as a way to maintain what limited freedoms they enjoyed, especially in the wake of the end of Readjuster control of the state.

One of the topics that I briefly explore in the book is the challenge of connecting black residents of Petersburg to the history at the Crater.  Earlier this week I posted on a parade in Fredericksburg that recreates the postwar participation of local blacks in decorating and honoring Union graves.  If repeated it at least has the potential to connect a certain segment of the community to the Civil War past and its continued relevance.  Perhaps the recreation of a black militia march in Petersburg with their overt references to black participation in the war can achieve similar ends.  Just a thought.

Next post: Restoring Charles Hoffbauer’s “Four Seasons of the Confederacy”