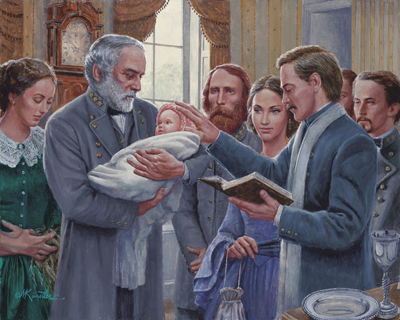 I don’t normally share reader mail, but this struck me as worth posting.  It’s been a few years since I last visited Stratford Hall and while I had a pleasant visit I too was struck by the emphasis on the cherubs.

Today I visited Stratford Hall.  The Great House obviously demonstrates the Lee family’s tremendous wealth during the eighteenth-century, and, while I was generally impressed with the interpretation of the plantation, I was a bit disappointed that there is not a more significant effort to interpret the slave life enforced and endured at Stratford Hall.

The docent pointed out the cherubs in the nursery’s fireplace that young four-year-old Robert E. Lee said good-bye to when he and his family moved to Alexandria.  Apparently, as the story goes, young Robert recognized the gravity of his family’s move and that he would not see his cherubs anymore.

What struck me with this story is how it conveys his sense of childhood innocence, which of course we should expect from a small child. Sheltered from the world around him, he had become attached to these cherubs set into the fireplace’s iron backing.  He regarded them as something real, something deserving of a farewell, all the while his family enslaved dozens of African Americans and denied them the opportunity of any similar sense of childhood bliss.  Did young Robert ever hear the crack of a whip or the crying horror of a slave being sold away from his family?  We’ll never know perhaps.  But if he did, his family and possibly even black servant protectors shielded him from the oppression outside and away from the Great House and its more immediate and stately environs.

I have young children who have neither experienced nor have come to understand the ugliness that the world perpetuates and endures. For this, I am thankful beyond expression.  I often wonder what they will grow up to become, to believe and to defend as worthwhile. Young Robert grew up to defend a slaveocracy- an institution that represented everything opposed and contradictory to those cherubs in the fireplace.  Acknowledging our history, even its ugliness, helps to strive to do better for the next generation.

Previous post: A Bad Day for David Barton, But a Good Day for History