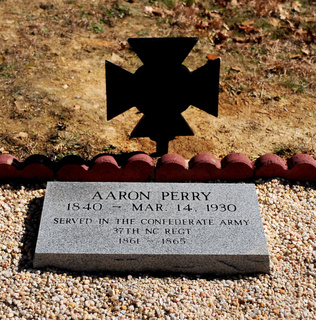 Aaron Perry Did Not Serve in the 37th NC

The date has been set.  On December 8, Union County, North Carolina will dedicate a privately-funded marker on the Old County Courthouse honoring area slaves who performed various functions for the Confederate army.  This has been a long time coming and many of you have followed this story here at Civil War Memory.  Despite the reference to slaves in this article, the reference to these men as “Confederate Pensioners” does not bode well for an event that supposedly intends to recognize the role and place of slaves in the Confederate war effort.  Both Wary (Weary) Clyburn and Aaron Perry are included in the list of men to be honored and have been discussed on this site at length.

As for the article itself, I would love for someone to explain this sentence to me.

While it’s impossible to know how many of the men willingly followed their masters into war and how many were forced, supporters of the plan called it an appropriate, if overdue, recognition of their service.

What does it mean to willingly follow your master to do anything?

Costumed Civil War re-enactors, national and state leaders of the SCV, and a color guard also will be on hand.

Will that include reenactors, who will play the role of camp servants?  Will the audience get a glimpse into the world of slaves, who accompanied their masters to war or are we going to get the black reenactor in Confederate uniform routine?  Will those attending and the many more who will read the marker later understand that we are talking about slaves?
As I’ve said all along, these men deserve to be recognized, but we should do so with a critical eye toward getting the history right rather than distorting it for our own self-serving reasons.  I look forward to having my fears proven wrong.  Oh, and Earl Ijames will deliver the keynote address.