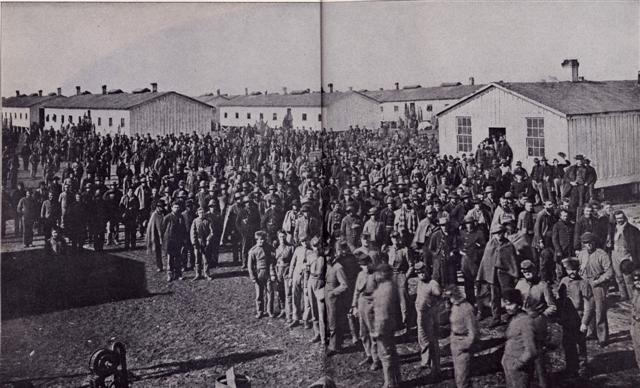 Here is an interesting story to start off the week.  Apparently, a group in Chicago wants to build an alternative school that includes a Civil War museum on the grounds of Camp Douglas.  If approved, the school would be housed in a former funeral home that was once owned by Ernest Griffin.  Before he died Griffin discovered that the funeral home was located on the grounds of the former prison and recruitment center and that one of his ancestors had served in the USCTs.

He set out to learn all he could about the Civil War, becoming an expert and amassing a grand memorabilia collection along the way before his death in 1995.  “It’s a fairly large collection, mostly genealogy,” according to Kelly McGrath, spokeswoman for the Newberry Library.  Heirs Dawn Griffin O’Neal and husband Jim O’Neal donated Griffin’s collection to the museum this summer. It’s yet to be catalogued.  Griffin had gained infamy by flying a Confederate flag on his property — alongside flags of the United States, Africa and a P.O.W. flag.  In 1990, at a ceremony attended by Daley and then-Ald. Bobby Rush, the funeral director installed a Heritage Memorial Wall in his parking lot to honor those who died in the camp.  All that is donated. A property marker remains, however, noting this is the “site of enlistment of Private Charles H. Griffin, Jan. 5, 1864, Co. B. 29th Reg., T. U.S. Col, D Infantry USCT.”  Griffin’s grandfather served in Company B of the 29th Regiment of the U.S. Colored Infantry, the first African-American Union Army division in the state of Virginia.

Organizers hope to utilize these assets to establish a program in cultural preservation.  I am not quite sure what to make of this.  Ignoring the local political issues and just thinking of the possibilities leaves me with a number of questions and very few answers.  How does a program in cultural preservation help this particular group of students?  Who staffs it?  Anyway, it does sound interesting and I will make sure to keep you posted.

Next post: The American Paradox of Slavery and Freedom