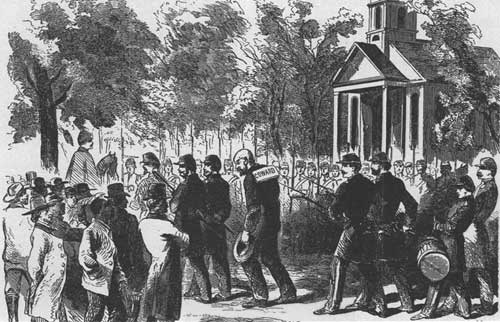 One of the things that I find particularly interesting about Winsmith’s letters home is the attention he gives to reporting on the conduct and overall well being of his men.  This is not surprising given his rank of captain and command of a unit raised in and around Spartanburg, South Carolina.  Winsmith clearly assumed responsibility for his men and understood that family and friends on the home front would be interested in their progress.  You find references to the men under his command who were wounded or killed in battle along with instructions on how to forward back pay to next of kin in the case of the latter.  Other times Winsmith asks family members to check in on families with loved ones in his unit.

While Winsmith highlighted the bravery and sacrifice of his men, more often than not, the references to his men are in connection to their desertion from the army.  From the beginning of the war Winsmith struggled to maintain the integrity of his company.  He had little patience with deserters or conduct that fell short of the discipline and sacrifice that was necessary to achieve independence.  At times the list of names is long and in some cases the names re-appear over the course of the war.

It should have been obvious to me from the beginning as to why Winsmith went out of his way to list these individual names in letters to his father, mother, and sister.  No doubt, Winsmith hoped that these names would be passed through the community and ultimately tip local authorities and/or shame the individual and family.  Following Jefferson Davis’s amnesty proclamation to deserters Winsmith had this to say.

Well, everything is yet going on quietly with us.  My deserters are doing very well, and I hope their conduct may have impressed a salutary lesson upon them.  Bill Taylor says he will do the thing that is right now.  I expect they will all be thankful to the President that he has offered them pardon.  I see that deserters at home, except Harrison have repented of their conduct, and will come back with Lt. Bearden.  (August 7, 1863)

And a few days later he had this to say.

You are right in supposing that the deserters will be pardoned under the President’s proclamation; i.e. all who return within 20 days. I learn from your letter that Arch Harrison has delivered himself up and would return voluntarily to camp.  I have heard that Bob Bogan has taken to the woods again.  Lt. Bearden has not written me one word whether he has arrested Thomas and Smith.  The only one he has arrested is Taylor.  (August 10, 1863)

Depending on how this project proceeds it may be helpful to map out where the men referenced in the letters lived in relationship to the Winsmith home at Camp Hill.  Muster records may also shed light on whether there was any causal connection between this form of public shaming and desertion in his unit specifically.  Finally, in reference to the names that appear regularly it may be interesting to know whether Winsmith judged between his parents and sister as to who was more closely connected to the individual and family in question.

Leave a Reply to TFSmith1Cancel reply