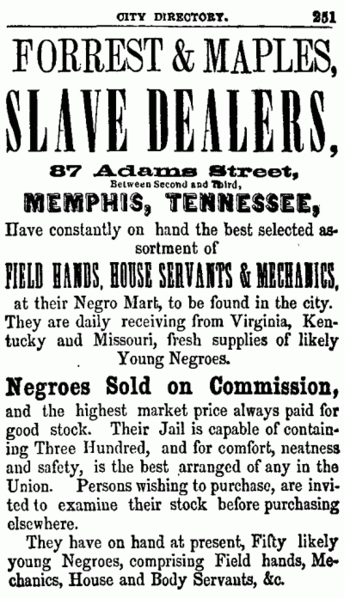 This story just keeps getting more bizarre by the hour.  Earlier today it looked like the Memphis City Council was going to vote to change the name of Forrest Park to Forrest – Wells Park, in honor of Ida B. Wells.  Of course, local heritage organizers decided to shuttle in H.K. Edgerton to speak on behalf of a slave trader and member of the Ku Klux Klan.  A few hour ago it looked like the council was going to rush through a vote to beat the passage of legislation on the state level (PDF) that would make it illegal to change the name of any public space named after a military figure.  The latest news is that a decision was made to temporarily change the names of three city parks:

And there you have it.  I assume they will re-visit this issue at a later date.  As always, I am happy with what the local community decides through their local elected officials.

That said, I do hope they decide to amend the name of the park to include Wells rather than discard Forrest entirely.  The dedication of a park after such an individual tells us something important about the history of race and white power in Memphis’s history.  Tearing it down does little more than erase that history from public view.  Adding a monument and/or marker to Ida B. Wells compliments the Forrest monument in any number of ways.  It reflects the voices of a part of the community that was prevented from taking part in the process that led to the original dedication and, more importantly, it reflects a stark change of values.

Think of the interpretive possibilities: a woman who fought for civil rights and worked tirelessly to bring an end to lynchings alongside a slave-trader, Confederate general responsible for one of the largest massacres during the Civil War and member of the KKK.  If Forrest did make an honest overture toward the black community at the very end of his life than it should, in some way, be acknowledged.  Does he deserve to be celebrated for it?  No.