Confederate Heritage Advocates Devour Their Own 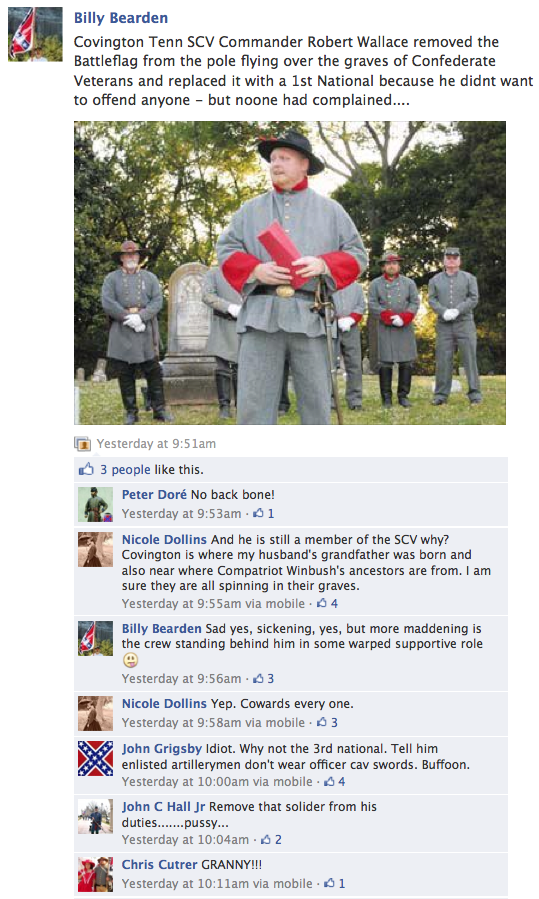 If you want a sense of how obsessed some Confederate heritage advocates are about the battle flag look no further.  I came across this gem of a thread on the Confederate Flaggers Facebook page earlier today and it doesn’t disappoint.  Billy Bearden is an active Flagger and on occasion will share a thought or two on this site.  I like having him around.  Once in a while he offers something worthy of reflection, but this clearly represents a walk off the deep end.

No one on this page seems to know why the Covington (Tenn.) chapter of the SCV chose to remove the battle flag from the cemetery in favor of a First National Flag and as far as I can tell no one has bothered to ask.  I actually don’t have a problem with the display of battle flags in Confederate cemeteries.  It seems to me that the people who are offended by the symbol are not likely to visit and if its presence helps those who wish to commemorate/remember these men than so be it.  Perhaps the group removed it because the battle flag has proven to be too much of a distraction from the men they wish to honor.  Perhaps the group understands that their ability to reach out to the broader community will be hampered by all the negative attention that particular flag will likely generate.  Ultimately, what is more important, debating the divisive history of the flag or sharing the stories of the men the SCV are committed to honoring and a time when that project is under assault?

What I find fascinating, however, is just the sheer nastiness of the comments that follow as well as the ones that didn’t make it into the pic.

Well, if a SCV leader is so miss guided about the Heritage Attacks on us, then that leader should be forced out! Immediately!

And how about Tripp Lewis, who was recently arrested in front of the VMFA for confronting museum security.

know what we can do with the rope from the old oakwood flag pole now…. and it ant to put up another flag..

Last but not least there is H.K. Edgerton, who isn’t satisfied that this same group is planning to honor another mythical black Confederate soldier.

Noting that Wallace said his group intends to install a new grave marker for a black Confederate soldier buried in the cemetery, Edgerton said, “Believe me, if that old black Confederate’s hallowed bones could speak, they would say the best memorial Mr. Wallace could make would be his letter of resignation from the SCV.”

Well played, Mr. Edgerton. Well played.
Billy Bearden is fond of pointing to the NAACP as the most significant threat to Confederate heritage.  It’s clear to me that the problem is much closer to home.