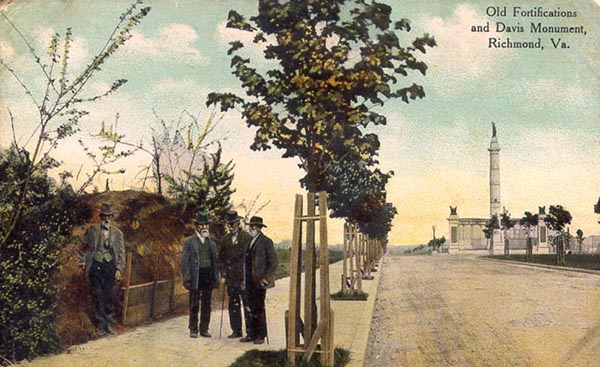 Update: As of 05/12 inquiries have been made with the Richmond Times-Dispatch and Richmond Police. Mr. Rob Walker, who is the VCU student has also been contacted.  Again, as of today nothing has appeared in the Richmond news about this incident. With the following words hanging over these unanswered questions let’s hope we can resolve it and focus on the praise that this individual deserves:  We do not believe there are ANY coincidences or happenstance in what has transpired since we began our work 20 months ago.  There is no denying God’s hand in this… in bringing Rob to Monument Ave. last November, and then, miraculously again last night at the exact moment and time to prevent what could have been irreparable damage to one of our most treasured monuments AND facilitating the first arrest (that we are aware of) of these punk vandals that have no regard for the rule of law:  neither God’s nor man’s. – Susan Hathaway, Virginia Flaggers

Over the years I have made my position on the defacing of monuments quite clear. I have zero toleration for it.  So, you can imagine my surprise and relief when I learned that someone with very close ties to the Virginia Flaggers stopped a couple of vandals from defacing the Jefferson Davis Monument in Richmond on the evening of May 9.  The individual in question is a film student at VCU, who over the past few months has been chronicling the activities of the Flaggers.  You can read the following account, which has been circulated on numerous sites here, here, here, here, here and here.

It’s a dramatic story involving tasers and a citizens arrest.

From the car, Rob yelled at the men to stop what they were doing and drop the screwdriver.  They refused, and began swearing and shouting at him.   I should mention that Rob is a US Veteran of Operation Iraqi Freedom.  He was injured in, but survived the attack on the USS Cole.  Rob also used to drive a Taxi, and carries with him at all times, from his days as a driver, a cattle prod/club, with a taser on one end.

Armed with the club, he approached the men and again, told them to drop the screwdriver.  The man with the screwdriver refused, and waved it at him in a threatening manner.  When the man came closer, Rob punched the club into his chest and tasered him, at which time the man was rendered helpless and Rob was able to subdue him.  At this point, the other vandal ran off, skeered.  As the subdued vandal came to, Rob (who, by the way, is 6’ plus a bunch)  was able to keep him on the ground by resting his knee on his back, and applying his body weight with his knee.  Meanwhile, the vandal who ran away had returned, and taken position across the street.  After a few minutes, the punk must have decided the police weren’t coming, most likely because they had not seen Rob call them.   He then picked up a stick and came back over to the monument, apparently to attempt to free his partner in crime. BIG mistake.

When the man swung the stick at Rob, Rob blocked it with the club, broke the stick in two, and tagged the vandal with the taser.  Down went the second vandal… lying helpless on the ground beside his friend.   Until the police arrived, Rob held the screwdriver wielding vandal down,  and, as necessary, reached over to give the other punk a gentle tag of voltage each time he recovered enough and attempted to escape.

I think I speak for many of you when I thank this concerned citizen for placing himself at risk to protect a history that many of us care deeply about.  My concern now is that apart from these few postings no one else seems to care.  Where are the witnesses that must have crowded around and taken footage on their iPhones? Let’s get those up on YouTube people.  Where is the local media?  Richmond news has made it a point over the years to cover incidents of vandalism, especially Civil War related [and here].  How could they not be interested in a dramatic citizens arrest and the use of a taser?  It is entirely possible that the story appeared on local news, but not on a website. Please let us know if you live in the Richmond area and have seen such a story.

With the police present I thought I might be able to find additional information on their site.  I searched crime reports between 05/08 – 05/10 in both the Fan and Museum Districts and came up with nothing.  Perhaps I am searching in the wrong neighborhood or it could be that the site is continuously updated.

The last thing I want to see is anyone doubting the truth of this story based on the history of staged confrontations that the Flaggers have utilized to garner public attention in the past.  Let’s get to the bottom of this.