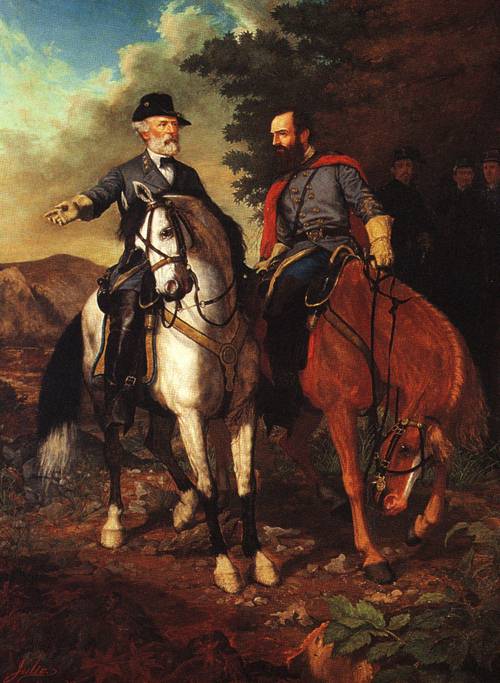 . It’s incredible.  While I enjoy looking at art, I don’t spend nearly enough time reading about it. In the introduction I came across Everett B.D. Fabrino Julio’s The Last Meeting of Lee and Jackson, which as many of you know is located at the Museum of the Confederacy. I did not know that Julio initially offered the painting to Lee himself as a gift, who politely refused. I mean, where would you put it given the painting’s dimensions.

For a time it was on public display in New Orleans, which is where Mark Twain viewed it. Here is his colorful review.

[I]n the Washington Artillery building…we saw…a fine oil-painting representing Stonewall Jackson’s last interview with General Lee. Both men are on horseback. Jackson has just ridden up, and is accosting Lee. The picture is very valuable, on account of the portraits, which are authentic. But like many another historical picture, it means nothing without its label. And one label will fit it as well as another:

First Interview between Lee and Jackson.

Last Interview between Lee and Jackson.

Jackson introducing himself to Lee.

Jackson Apologizing for a Heavy Defeat.

Jackson Asking Lee for a Match.

It tells one story, and a sufficient one; for it says quite plainly and satisfactorily, “Here are Lee and Jackson together.” The artist would have made it tell that this is Lee and Jackson’s last interview if he could have done it. But he couldn’t, for there wasn’t any way to do it. A good legible label is usually worth, for information, a ton of significant attitude and expression in a historical picture.

Clearly, Twain’s brief stint in Confederate ranks did little for his respect for the Lost Cause. And for that we thank him.