Can the Republican Party Reclaim Lincoln? 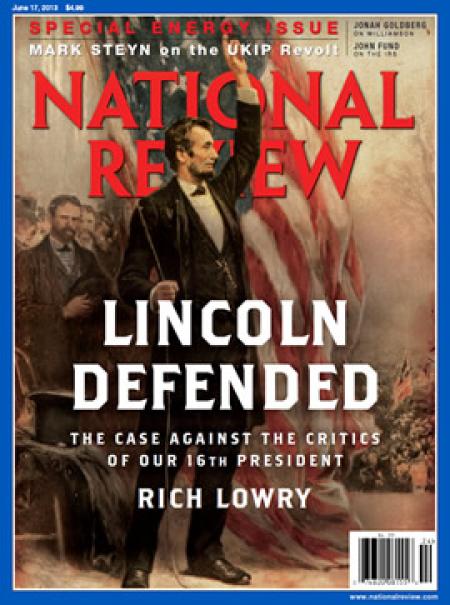 Next month National Review editor, Rich Lowry, is publishing a book about Abraham Lincoln. Part of the project is an attempt to reclaim Lincoln from the extreme Libertarian Right of Thomas DiLorenzo and Walter Williams, among others. In the most recent issue of NR Lowry offers a taste of his forthcoming book.

The anti-Lincoln critique is mostly, but not entirely, limited to a fringe. Yet it speaks to a longstanding ambivalence among conservatives about Lincoln. A few founding figures of this magazine were firmly in the anti-Lincoln camp. Libertarianism is rife with critics of Lincoln, among them Ron Paul and the denizens of the fever-swamp at LewRockwell.com. The Loyola University Maryland professor Thomas DiLorenzo has made a cottage industry of publishing unhinged Lincoln-hating polemics. The list of detractors includes left-over agrarians, southern romantics, and a species of libertarians — “people-owning libertarians,” as one of my colleagues archly calls them — who apparently hate federal power more than they abhor slavery. They are all united in their conviction that both in resisting secession and in the way he did it, Lincoln took American history on one of its great Wrong Turns.

Anyone familiar with mainstream academic work on Lincoln will find absolutely nothing new in this article.  It doesn’t take much for Lowry to dismantle the DiLorenzo-Williams interpretation of Lincoln because so little of it is actually built on a serious reading of the relevant history.  The humor of it all quickly fades. In fact, this article (and perhaps eve the book) has very little to do with Lincoln or the Civil War. Rather, Lowry is clearly worried about the current state and identity of the Republican Party. “A conservatism that rejects Lincoln,” writes Lowry “is a conservatism that wants to confine itself to an irritable irrelevance to 21st-century America and neglect what should be the great project of reviving it as a country of aspiration.”

I don’t know whether Lowry does so in his book, but part of the project of reclaiming Lincoln for the Republican Party might involve dismantling the myth that the Confederacy represented a beacon of small government and respect for states rights. As I’ve shown on more than one occasion nothing could be further from the truth. Perhaps Lowry could compare Lincoln with that other advocate of Big Government, none other than Robert E. Lee.

Here is what Gary Gallagher has to say about Lee in his new book, Becoming Confederates: Paths to a New National Loyalty.

Beyond his unrelenting efforts to find more soldiers, Lee supported the central government’s right to impress food, animals, and black laborers. During the winter of 1864, he stated that all the Confederacy’s war-related resources should be brought to bear against the enemy. He knew civilians bridled at the loss of crops and other supplies to the Richmond government’s impressment agents. This politically charged reality, thought Lee, obliged Congress to enact legislation that apportioned economic burdens fairly. But he nonetheless took a hard line: “I think the present law and orders on the subject should be so modified as to authorize the Government to impress when necessary a certain proportion of everything produced in the country.” If leather for shoes could be obtained in no other way, “it should be impressed.” And if it required “all the meat in the country to support the army, it should be had.” The Confederacy’s railroads also should be put to the task of delivering supplies to the military fronts. “I earnestly recommend that no private interests be allowed to interfere with the use of all the facilities for transportation that we possess until the wants of the army are provided for,” Lee wrote to the secretary of war. Confederate “railroads should be at once devoted exclusively to this purpose, even should it be found necessary to suspend all private travel for business or pleasure upon them for the present.” (p. 24)

Add to the mix Lee’s eventual call to recruit black soldiers and you have yourself a Confederate nationalist in the first degree. If the government needs it, the government has the right to take it.

I don’t advise playing political football with the past, but if you are going to do so than you should go all in.