A Black Confederate We Can All Live With 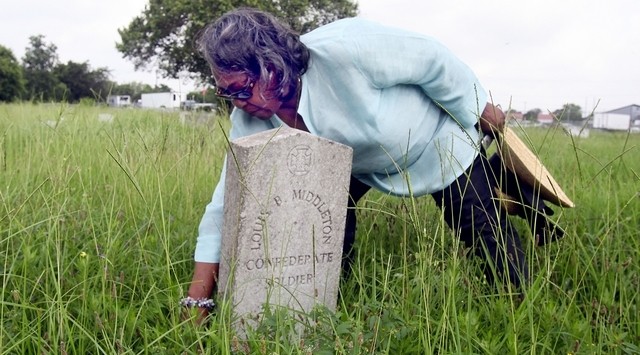 Earlier this month Schuyler Kropf shared the story of Polly Sheppard, who was surprised to find the grave of a black Confederate soldier in the cemetery of the Emanuel African Methodist Episcopal Church of Charleston. The individual in question is Louis B. Middleton, whose grave is marked with a soldiers’ headstone. This has all the earmarks of another in a long line of distorted stories about blacks who somehow managed to evade Confederate law and a society committed to keeping weapons out of their hands.

Granted, it’s not perfect, but Kropf manages to skirt some of the larger landmines that often leave intelligent readers scratching their heads. Early on in the story Middleton is correctly identified as a cook and not as a soldier. The reporter made it a point to talk with a reputable historian at the University of South Carolina.

“I think there are a lot of Confederate sympathizers who exaggerate the role of blacks in the Confederate military,” said Don Doyle, the McCausland professor of history at the University of South Carolina. “And a lot of skeptics who dismiss the idea that it was even possible.”

The reality, Doyle said, is that black involvement in the South was largely forced, with little say-so in their daily lives as they were put into essential roles from laborers to teamsters and general servants. “This cook would be a perfect example of what was the typical,” Doyle said.

And there is no mistaking Middleton’s legal status given the availability of records detailing who he served during the war.  The reporter makes it clear that “many slaves in South Carolina were used in the national defense — helping build coastal fortifications or performing other duties — freeing up whites for the fighting. Still others became integral members of camp ranks, following men of means into their assignments, attending to their needs.”

Even better, Kropf explores the fact that Middleton applied for and received a pension in the early twentieth century. This is typically reported as evidence that the individual in question was a soldier or it is left poorly analyzed.

In the 1920s, the S.C. Legislature opted to provide pensions for some of these men. Historian Alexia Jones Helsley, who worked at the S.C. Department of Archives and History for more than 30 years and currently teaches at USC-Aiken, chronicled the development of the pension payouts, publishing her research in a collection titled “South Carolina’s African American Confederate Pensioners 1923-1925.”

The motivation behind the pensions, she said, was not completely noble on the part of lawmakers. First, they were a way of reducing financial burdens on the community. Most of the men were in their 70s and older by then, and unable to do most types of paying work. Second, the pensions came as many Southern blacks were following the great migration to the cities of the North, looking for a better life but draining the state’s workforce. The pensions were seen as an attempt to create respect for those who supported the southern cause, Helsley said. The pension act wording said the payments were “for certain faithful Negroes who were engaged in the service of the State in War between the States.” The first round of pensions were not to exceed $25 annually. Laborers, servants and cooks were the most frequent job description.

A local Sons of Confederate Veterans representative receives only passing attention and predictably fails to offer anything useful. Unfortunately, the catalyst for this story is lost to the story entirely. What will/should be done with the grave marker? It clearly misrepresents Middleton’s story.

In the name of history, heritage, and human dignity I say this man deserves better.

And thanks again to Schuyler Kropf for a job well done.

Next post: A Forgotten Battle For the Second Amendment