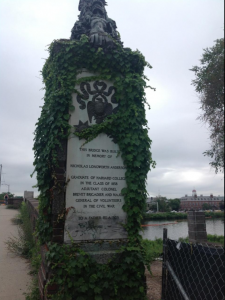 I suspect that for the vast majority of Bostonians and tourists, the city’s history is indelibly stamped (no pun intended) with the events of the American Revolution. I, on the other hand, see the American Civil War everywhere or signs of how Bostonians chose to remember their Civil War. We’ve got some pretty impressive sites such as Harvard’s Memorial Hall and, of course, Saint Gaudens’s Robert Gould Shaw Memorial (54th), but there are also more obscure reminders that are likely missed by most people.

The Anderson Memorial Bridge over the Charles River is one such example. The bridge was built by Larz Anderson as a memorial to his father, Nicholas Longworth Anderson, who fought through and survived the war. Anderson rose from the rank of private to Col. of the 6th Ohio Volunteer Infantry to Brevet Major General of Volunteers. He fought in western Virginia early in the war and saw action in most of the major battles of the Western Theatre, including Stones River and Chickamauga.