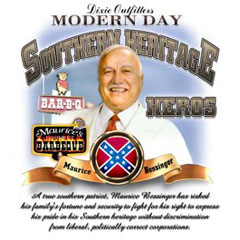 Not even the best legal minds in the Confederate South seem to be able to stem the tide of anti-Confederate flag legislation and sentiment.

Even the flags that once adorned Maurice Bessinger’s chain of barbecue restaurants in South Carolina fly no more.

The elder Bessinger, who ran unsuccessfully for governor in the ‚Äô70s, has not been involved in running the business for several years. Most of the flags at the restaurants quietly came down more than a year ago, Lloyd Bessinger said.

The family-run operation wants to stay neutral politically, appealing to Republicans and Democrats, Bessinger said. ‚ÄúDad liked politics,‚Äù he said. ‚ÄúThat‚Äôs not something we‚Äôre interested in doing. We want to serve great barbecue. ‚ÄúWe want to get past that.‚Äù

In honor of this move, I leave you with this classic Stephen Colbert interview with Bessinger that was done while working for Jon Stewart. Oh well, he will always have his Dixie Outfitters t-shirt.

“Levin‚Äôs study is the first of its kind to blueprint and then debunk the mythology of enslaved African Americans who allegedly served voluntarily in behalf of the Confederacy.”–Journal of Southern History

Next post: Will President Obama Travel To Gettysburg Next Month?

Previous post: Former Slaves in the Spotlight, but With No Vote