A Hate Crime Against Confederate Descendants 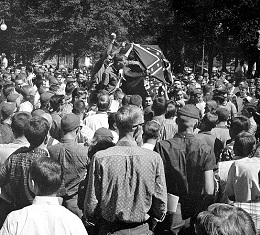 Rally against integration at Ole Miss in 1962

A couple of days ago an unfortunate incident occurred at the University of Mississippi. Apparently, two men placed a noose and a 2003 Georgia State flag on the James Meredith statue. Most of you know that the design of this particular version of the Georgia flag includes the popular Confederate battle emblem. While it’s too early to draw any firm conclusions about the perpetrators, most people see this as a hate crime directed specifically against the black student body and the broader African-American community.

At least one individual, however, has taken a more inclusive view as to who should rightfully be offended. No need to provide names or links this time.

It was a hate crime. A planned one perhaps, maybe almost certainly so, but a hate crime none-the-less. The crime was against those who saw it and were offended, and equally a hate crime against all Confederate descendants who honor that symbol and their ancestry. This act denigrated us all.

Here are students at Ole Miss protesting the presence of the Confederate flag on campus so as to allow James Meredith to register for classes. Yes, sometimes memory trumps history.

Next post: What Budweiser Does to Civil War Memory

Previous post: From the State Flag to Your Car’s Exhaust