Confederate History for All Virginians (if you can make the case) 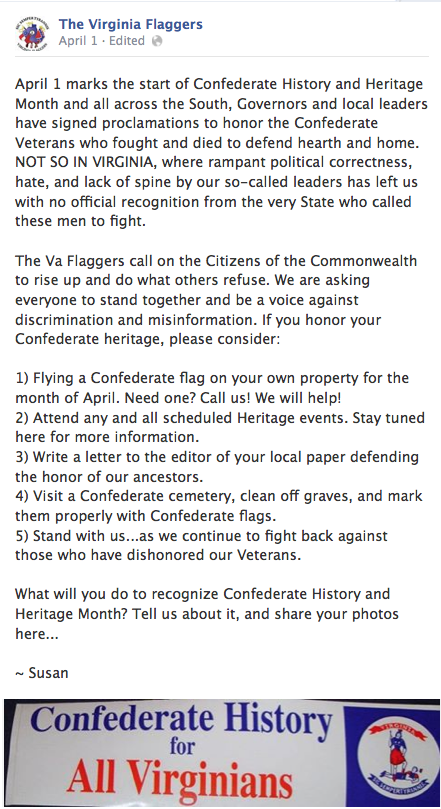 I go into the classroom every day with the goal of trying to bring the past alive and to help my students pull meaning and lessons for their own lives. It’s not an easy task and I would be kidding myself if I thought that I succeeded in regard to every student that has ever entered my classroom or even a significant majority. I’ve reconciled myself to thinking about it in terms of degrees of success. I’ve never believed that we come hardwired to embrace and appreciate the importance of the past. It’s something that must be encouraged over time and with great care.

I was reminded of this as I was perusing my favorite Facebook pages instead of grading papers. In this post a prominent voice in the Virginia Flaggers whines incessantly that the governor of Virginia has yet to issue a Confederate History Month proclamation. There is still time and my money is on that it will eventually be published – thought it’s content will likely fall short of what it expected by certain circles.

This brings me to my point. The constant whining and complaining about “political correctness,” “hate” along with claims of “discrimination and misinformation” and “dishonor” that spew forth from the same tired keyboards misses one crucial fact. The very same people who feel more on the defensive year after year because not everyone agrees with their preferred narrative have simply failed to make a compelling case.

Now, I think what I am doing in the classroom each and every day is different from what the Virginia Flaggers do, but we do have one thing in common. All of us have a desire to connect people to their pasts.

What the Flaggers and other Confederate heritage advocates conveniently forget, however, is that we live in a marketplace of ideas. People are free to believe what they choose or not believe anything at all. Complaining that the NAACP, academics, the entire liberal wing of the political spectrum and other elements of society have conspired against what you cherish does nothing to convince people that your particular beliefs are worth adopting. If you feel as if you are being pushed further and further away from being able to openly celebrate or commemorate the past in public spaces than perhaps you need to do a better job formulating your arguments.