Can the Lost Cause and Civil Rights Narratives Co-Exist in the South?

Update: This story from yesterday’s New York Times on Mississippi’s planned Civil Rights museum slated to open in 2017 fits right into this post. 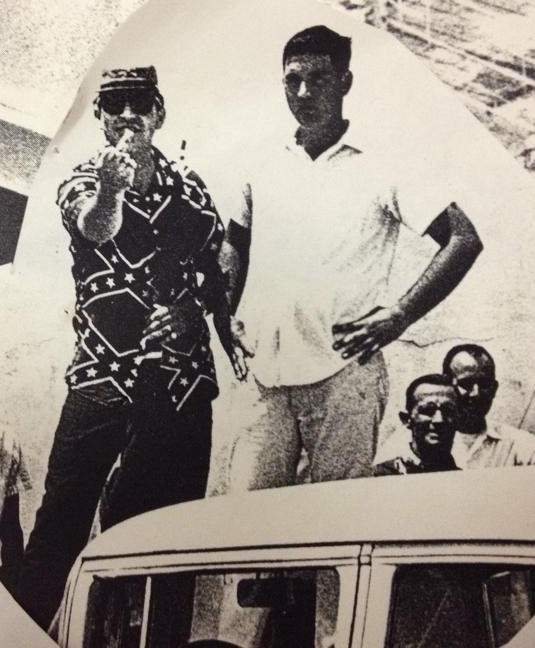 While interpreting the Jefferson Davis and Confederate Soldiers’ Monuments on the Alabama State House grounds a little over a week ago I couldn’t help but wonder whether this Lost Cause narrative and a growing commitment to remember the civil rights movement can co-exist. It’s hard to miss the latter in a place like Montgomery and other Southern cities. Jefferson Davis now looks down on the Rosa Parks Museum and a number of markers that remind folks of the slave trade and civil rights era. On the one hand these monuments, museums, and markers represent an evolving story about how communities choose to remember their collective pasts. At the same time it is hard not to feel the rub between the competing values that these sites represent.

Perhaps these two narratives do not conflict for most people looking for the history of the South. In Natchez, Mississippi there appears to be some recognition that the city’s heritage tourism has shifted in recent years.

“Younger people don’t care so much about the past or the old stories,” said David S. Dreyer, a local historian who volunteers at the museum. “There are so many stories that haven’t been told here, but people might not get that with just the Pilgrimage. We need to find a way to tell new stories.”

Although only three people were touring the museum, Dreyer vigilantly told the story of African-Americans in Natchez through the decades, explaining that slavery and cotton allowed Natchez plantation owners to build some of the most palatial antebellum mansions in history.

He moved into Reconstruction, when the city had its first African-American mayor. It would be more than 100 years later, in 2004, when Natchez would elect another black mayor. Then again, Mississippi hasn’t elected an African-American to statewide office since the late 1800s. Dreyer, who is white and an Indiana native, showed the group a bust of Martin Luther King Jr. near a wooden white cross, reminiscent of the kind that Ku Klux Klan members placed on Southern lawns in the 1950s. “My parents were involved in the civil rights movement,” said Isabel Jackson, who lives in southwestern Michigan. “It was important for us to come here. We felt like we needed to see this part of the city’s history.”

This last point is certainly one factor that is pushing reminders of the Civil War further into the background in some of these communities. The children of the civil rights generation are now old enough and sufficiently curious to want to see the sights and meet the people who fought for freedom in the 1950s and 60s. For communities such as Natchez it may come down to dollars.

At the same time, however, this story is also about what members of these communities believe is worth remembering. This weekend there is a story out of Richmond, Virginia about whether a new baseball park ought to be built on a site connected to the city’s history of the slave trade. These places and stories matter to people in Richmond and they believe they are worth preserving, in part, because they likely believe that visitors will also want to experience these places. No longer is the story of slavery and Jim Crow something to hide from the local public and the rest of the country.

The perceived conflict between the Civil War and Civil Rights pasts in the South may come down to the following: My school’s recent trip through the South (see posts from last week) went looking for important moments in American history, but we also went looking for inspiration and lessons that could be infused into our own lives.

Next post: The Confederate Soldier “Gave The Last Full Measure” For Us