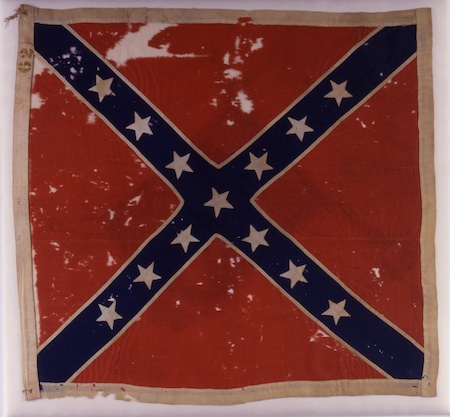 Amidst the focus on replica Confederate flags being removed from inside Lee Chapel on the W&L what has almost entirely been lost is the decision to properly exhibit original Confederate flags on a rotating basis in the museum space below the chapel. The first flag which will be displayed in the Lee Chapel museum is Battle Flag No. 62.

Captured at the Battle of Gettysburg on July 3, 1863, by the 12th New Jersey Infantry, this flag is believed to have belonged to the 26th North Carolina Infantry. A history of the 26th Infantry records the following report on the incident in which the flag was captured: “Our color bearer, a member of Company K, Facuett’s Company from Alamance County, succeeded in passing over this fence, but fell mortally wounded. He died that night with his face to the enemy. Our colors fell with our brave color-bearer not ten steps from the rock wall.” July 3 was the last day of fighting at Gettysburg.

Descriptions of the other battle flags scheduled to appear can be found here.

Yes, I can certainly see why so many people are outraged. 🙂