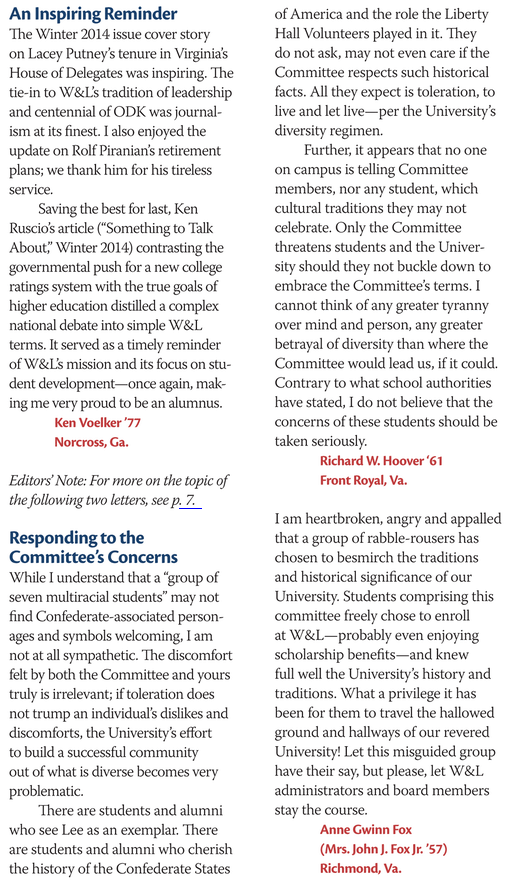 I have absolutely no problem with students and alumni at Washington & Lee University expressing disagreement with the school’s decision regarding the display of Confederate flags in Lee Chapel. After all, it’s their school. I expressed concerns about the Committee’s list of demands early on so I am certainly sympathetic to both sides. But there is something disturbing about the two alumni letters published in the most recent issue of the school’s magazine, both of who graduated during the civil rights era.

Both letters frame this dispute as if the black law students who made their concerns public don’t really belong at the school.

Only the Committee threatens students and the University should they not buckle down to embrace the Committee’s terms.

I am sorry but this group of students cannot threaten the student body because they are a part of it. It is their school. It is their right as students to voice their concerns when they perceive an injustice or other problem that deserves attention. And if “the concerns of these students should [not] be taken seriously” than whose should be taken seriously and under what conditions?

The second letter is much more problematic.

I am heartbroken, angry and appalled that a group of rabble-rousers has chosen to besmirch the traditions of our University.

Now there is a term that was commonly used to describe black Americans who campaigned for civil rights during the 1950s and 60s. The reference to “our University” in the same sentence as “rabble-rousers” suggests that this individual doesn’t consider these students to be legitimate members of the community. Suggesting that these black students are “probably even enjoying scholarship benefits” doesn’t help. One wonders what that language is code for.

What a privilege it has been for them to travel the hallowed ground and hallways of our revered University!

No more or less a “privilege” than it was for you and every other student who has set foot on campus since its founding. Its traditions and history belong to all of you.

Again, I believe there is plenty of room for disagreement over this issue, but I do hope that letters published in future issues of the magazine by more recent graduates at least acknowledge that these students are full members of the community.