Not Your Grandfather’s “March to the Sea” 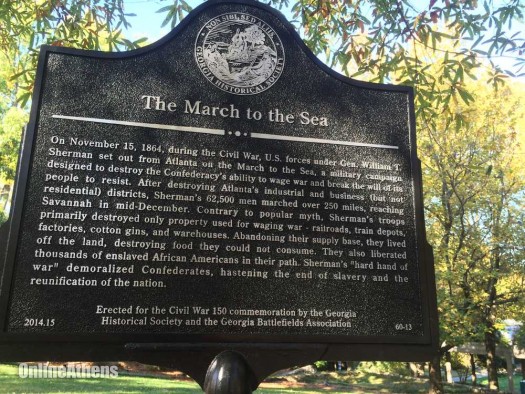 Update: Thanks to Craig Swain for sending along this link which includes information about an older marker. It offers a clear point of comparison with how our understanding of the campaign has evolved.

This week the Georgia Historical Society will dedicate the latest in its series of roadside markers commemorating the 150th anniversary of the Civil War. The marker featured above, commemorating the start of “Sherman’s March”, will be located on the grounds of the Jimmy Carter library.

On November 15, 1864, during the Civil War, U.S. forces under Gen. William T. Sherman set out from Atlanta on the March to the Sea, a military campaign designed to destroy the Confederacy’s ability to wage war and break the will of its people to resist. After destroying Atlanta’s industrial and business (but not residential) districts, Sherman’s 62,500 men marched over 250 miles, reaching Savannah in mid-December. Contrary to popular myth, Sherman’s troops primarily destroyed only property used for waging war — railroads, train depots, factories, cotton gins, and warehouses. Abandoning their supply base, they lived off the land, destroying food they could not consume. They also liberated thousands of enslaved African Americans in their path. Sherman’s “hard hand of war” demoralized Confederates, hastening the end of slavery and the reunification of the nation.

The marker’s content will not doubt ruffle the feathers of a select few, but overall it offers a more nuanced interpretation of the event. It may be the first marker that explicitly attempts to challenge “popular myth” about the march, which may explain why it is being placed at such a prominent site.