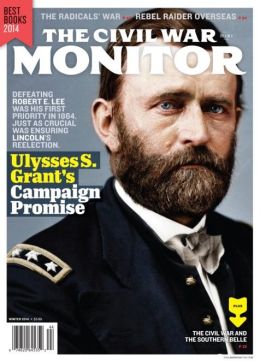 This year Terry Johnston was once again kind enough to ask me to contribute to another roundup of the best books of the year for the magazine. The categories were slightly different this year, but I don’t think there are any surprises regarding my top picks. If you don’t like my picks you can peruse books chosen by A. Wilson Greene, Kathryn Shively Meier, Gerald Prokopowicz, Lesley Gordon and Andrew Wagenhoffer.

This book serves as a reminder that the interpretation and even physical appearance of our Civil War battlefields is constantly evolving. Gettysburg enthusiasts and scholars alike will enjoy reading about an idea to cover battlefield monuments with bushes in the 1930s by park superintendent, James R. McConaghie, and plans to scrap the Virginia Monument during WWII. Unlike many books that explore the history of Civil War battlefields Murray brings her story to the present day, including discussion of the demolition of the Observation Tower and the controversy surrounding the destruction of the old Visitor Center along with the construction of the new one. Readers interested in Civil War memory, public history, tourism, and popular culture will enjoy and profit from this book.

Runner-Up: Edward Baptist, The Half Has Never Been Told: Slavery and the Making of American Capitalism (New York: Basic Books, 2014)

This is a hard-hitting book that will challenge those people who continue to view the “Old South” as a peaceful agrarian society that existed in sharp contrast with the North and parts of the rest of the world that had already embraced the tenets of modern capitalism. Baptist reveals a labor system that continually generated increased profits for owners and investors and slaves as little more than exploited commodities. Some readers will find the author’s use of imaginative vignettes to highlight the lives of slaves and ex-slaves as a distraction while others will likely interpret this literary device as a way to drive home some of the central analytical points of the book. Either way, this is a book that must be reckoned with by anyone interested in the history of capitalism in the United States.

Not Yet Read: Craig A. Warren, The Rebel Yell: A Cultural History (Tuscaloosa: University of Alabama Press, 2014)

I first learned about this book through Warren’s article in the pages of The Civil War Monitor. I am especially interested in reading more about how the Rebel cry was utilized, and by whom, during the postwar period. It is hard to believe that this is the first scholarly book on the subject.

The book is based on Brian’s dissertation, which he wrote under the direction of David Blight at Yale University. It will likely take its place alongside recent work on veterans by such historians as James Marten, Caroline Janney and Barbara Gannon.