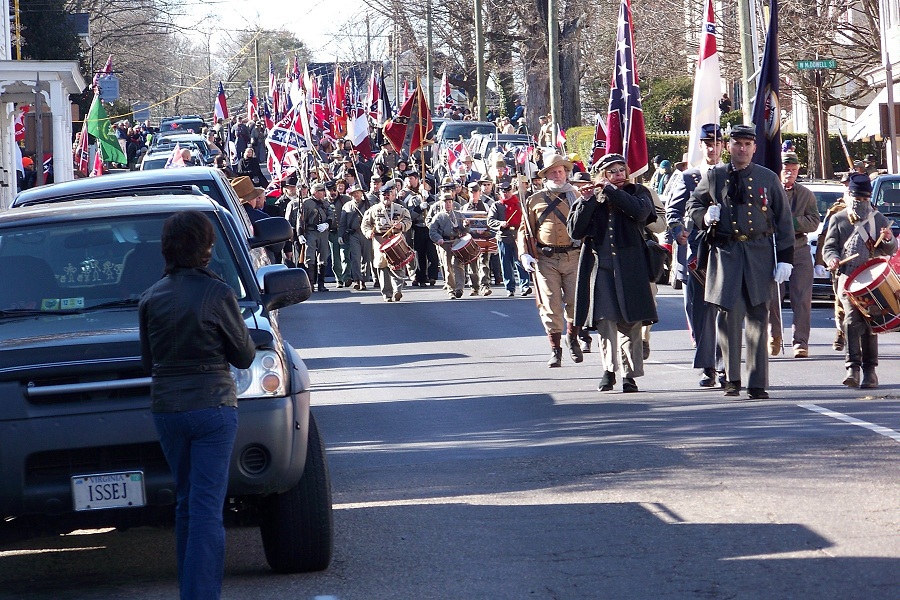 Jonathan Horn’s short article in The Daily Beast is designed to highlight his new biography of Robert E. Lee by wading into to the Confederate flag controversy at Washington & Lee University. While it will likely convince those predisposed politically to agree with his conclusions the historical content falls short. Horn’s basic point is that the available evidence concerning Lee’s brief tenure as president of then Washington College and his overall attitude regarding Confederate defeat ought to serve as a guide for how we see the current controversy about the display of the flags.

Far from being relics of Lee’s tenure, the Confederate battle flags only arrived in the college chapel decades after Lee’s death and were later replaced with the historically meaningless reproductions that hung until recently.

Lee did not want such divisive symbols following him to the grave. At his funeral in 1870, flags were notably absent from the procession. Former Confederate soldiers marching did not don their old military uniforms, and neither did the body they buried. “His Confederate uniform would have been ‘treason’ perhaps!” Lee’s daughter wrote.

So sensitive was Lee during his final years with extinguishing the fiery passions of the Civil War that he opposed erecting monuments on the battlefields where the Southern soldiers under his command had fought against the Union. “I think it wiser moreover not to keep open the sores of war, but to follow the examples of those nations who endeavoured to obliterate the marks of civil strife and to commit to oblivion the feelings it engendered,” he wrote.

Publicly, Lee played the reconciled ex-Confederate general. He had every reason not to want to bring negative attention to his struggling college campus in the immediate wake of the war. It is no surprise that he would not have wanted Confederate flags flying on campus or in any other part of Lexington, Virginia. However, as we well know Lee remained bitter in private about defeat, emancipation, and occupation.

More to the point, Confederate veterans in Virginia were prevented by Federal authorities from openly flying flags, wearing uniforms and even displaying military buttons in public spaces during Reconstruction, which ended in the state at the time of Lee’s death. This historical context is absolutely crucial to understanding why the Confederate flag was not more visible during this early stage. Lee and his fellow veterans were not making decisions about how or whether to commemorate the war in a historical vacuum.

The more accurate historical picture is much more interesting in connection to the current debate over the display of the Confederate flag. After 1870 in Virginia and eventually throughout the South Confederate veterans unfurled their flags. What I understand after reading John Coski’s book on the Confederate flag is that veterans chose to unfurl their flags on special occasions. More importantly, in the first few decades after the war they flew primarily (but not exclusively) original Confederate battle flags, which functioned as physical reminders of the late war. It seems that these flags were rarely meant to be displayed outside of a strict commemorative context, especially during the period in which veterans were involved.

Confederate veterans did not campaign for flags to be displayed on city light posts and they certainly did not have a need to remind the public of their service and sacrifice by putting up large flags along the highways. In fact, what emerges after careful study is how limited and calculated their use of the flag was for the remainder of their lives.

This is the historical context that is relevant to thinking about the display of the flag today and not a historically detached analysis of what Lee would have or would not have wanted.