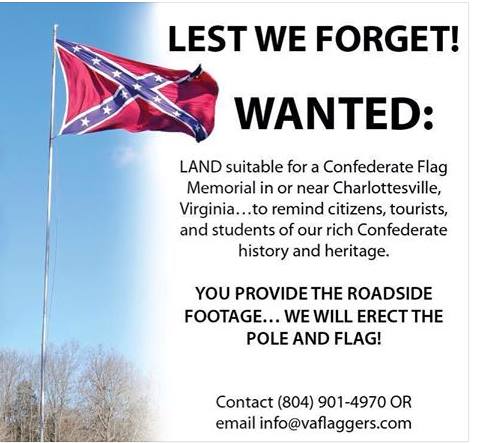 It was so predictable. Even the anticipation of a city council vote on March 2 regarding whether to continue to recognize Lee-Jackson Day has the Virginia Flaggers scrambling for a plot of land to raise when of their Confederate flags. It’s their usual signal of surrender when decisions by local communities don’t go their way.

I’ve never understood this preoccupation with raising flags on highways and in other places that provide absolutely no historical context whatsoever. How exactly is a passerby suppose to know that this particular flag is meant to be interpreted in a certain way? Are the Flaggers oblivious to the fact that the flag is fraught with competing interpretations? For the sake of getting their message across to the general public, why wouldn’t they choose a form of commemoration that is less likely to be misunderstood?

By raising the Confederate flag in such a way and without any context the Flaggers give up complete control over its meaning. And this is exactly what Confederate veterans worked so hard to avoid. The veterans took care of their battle flags by displaying them only on specific occasions. They didn’t fly their flags from highways or go soliciting individuals to fly it to spite a community. The United Daughters of the Confederacy developed strict guidelines for the display and handling of the flag. They developed it to counter groups like the Virginia Flaggers. Does anyone have any doubt that the veterans themselves would be appalled by how the Virginia Flaggers have treated their flag?

At the beginning of every semester of my Civil War course in Charlottesville I walked students over to the Confederate cemetery adjacent to the university. We talked about the history of the soldier monument and walked through to look at the information on the individual markers. Students spent time in quiet reflection and considered a number of questions that I provided before coming together as a group. Together we shared questions we would ask the men buried around us if we had the opportunity. Many of these questions guided the class throughout the semester. On the way out we picked up and discarded the trash and propped up any small Confederate flags that are almost always present in the cemetery.

There are so many ways that one can remember and even commemorate Confederate soldiers that doesn’t involve taking your frustrations out on an entire community that isn’t even your own. It certainly does nothing to remember the men buried in the university cemetery.

Next post: ‘From the Birthplace of Secession to the Graveyard of Slavery’