Report From the Field: Student Reflections

Over the past few days I’ve been going over student reflections from last week’s Civil War battlefields trip. There is simply no substitute for taking students to historic sites. The learning that can be accomplished and the connections to the past that can be forged at such places trumps all of the bells and whistles found in the seemingly endless supply of new gadgets and programs. Don’t get me wrong, I embrace technology in the classroom, but trips like this help me to put it all in perspective. 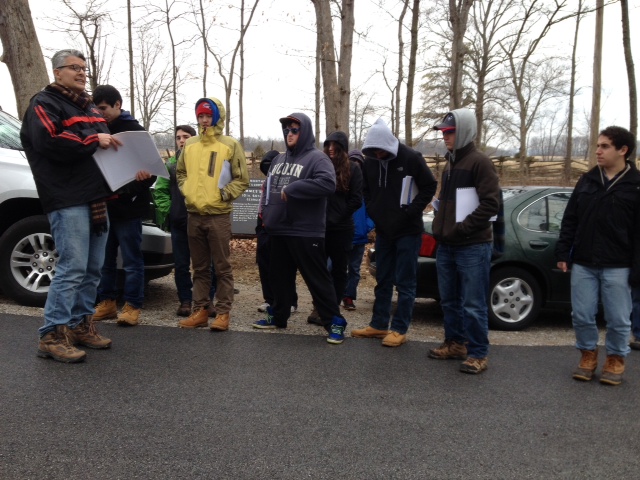 Peter Carmichael with my students at Rose Woods in Gettysburg

The first is from what was one of the most interesting discussions of the entire trip, which took place at the Kirkland Monument on Marye’s Heights in Fredericksburg. After walking the Sunken Road and discussing the participation of the 20th Massachusetts Infantry we headed over to the monument to talk about memory and the history of this particular monument.

The Civil War Battleground trip was a reflective time for me. In Fredericksburg, VA, we discussed a memorial of a Confederate soldier, Richard Rowland Kirkland, who had brought water to the wounded Union soldiers. Although Kirkland’s actions were admirable, the memorial romanticizes the battle which took place there. Through the memorial’s presence, one man’s act of compassion has become one of the most prominently preserved events of the Fredericksburg battles to this day. After a war, a period of healing must occur. However, we cannot let our memory of the Civil War become romanticized. We need to learn to carefully form our own perspectives. Through the truth we gain from the means in which the Civil War has been memorialized and preserved.

The second offers a much broader assessment of the trip and includes an insight (or perhaps confusion) that anyone who has become obsessed with this period of history will appreciate.

The trip was extremely informative. I had read some of these battles in books but to actually see what the soldiers and generals saw nearly 150 years is something entirely different. There is an indescribable feeling I encountered when I walked over a battlefield where thousands of men fought for a cause they believed in. The Civil War shaped our nation. It decided the fate of America, and that I was able to walk on the actual battlefields where the outcome of our country was decided, is simply staggering. Over the trip I was trying to articulate the importance of preserving Civil War battlefields. Before the trip I knew that these places were important and over the trip I had tried to find out why. Obviously they’re important for showing people what it looked like during the War and they have an inherent educational value for people who don’t know that much about the battlefields. But those reasons seem shallow and only part of a larger answer. On the battlefields I started to feel something and I still can’t exactly articulate what it was. However, this trip definitely galvanized my interest in the Civil War and encouraged me to discover the complete answer to my question.

I appreciate the honesty and the intellectual struggle reflected in this passage. It reminds me of my own journey of now roughly twenty years of trying to understand my own attachment to this history.

Previous post: The Calm Before the Storm in the Capital of the Confederacy