Yesterday while reading about the history of the Confederate monument vandalized for a second time in Charlotte, North Carolina I came across the United Confederate Veterans official program for its dedication. The event took place on June 5, 1929. The program is filled with what you might expect. There is a schedule of events, articles about Stonewall Jackson and other prominent Confederate, images of local and national U.C.V. members  as well as words of support from various ladies auxiliary groups. Advertisements for Davidson College, Merrick’s Chocolate and Plexico can also be found. None of this surprised me.

What did surprise me, however, is a full-page feature on “Negro Schools” and “Negro Education in the South.” Why would this be in a U.C.V. program? 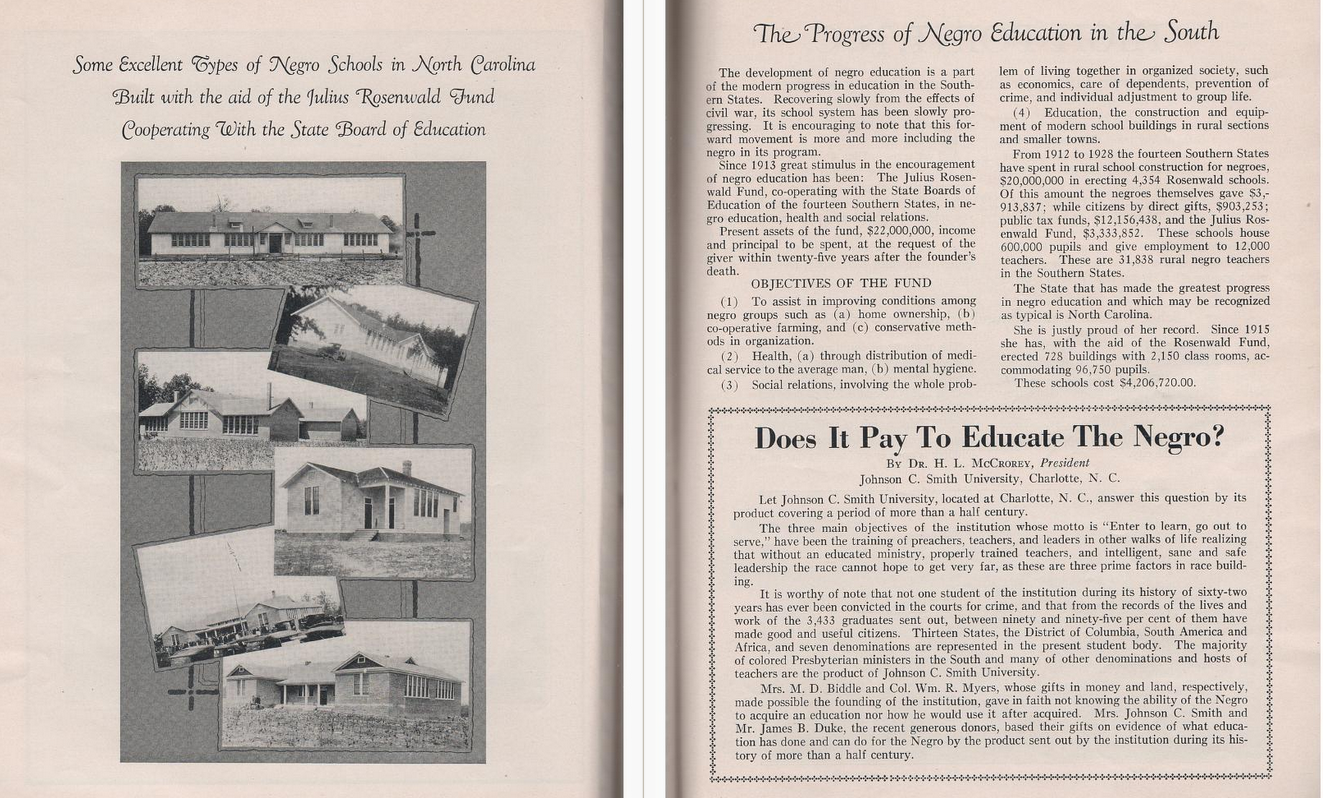 The answer has something to do with reference on the monument to the preservation of “Anglo-Saxon Civilization” which possibly attracted the vandals attention. In the comments section Chris Graham drew a helpful distinction between the meaning of this phrase in 1861 and 1929, which at first I didn’t entirely understand.

I think I do now. In fact, I believe the key to interpreting what many people view as a charged reference to white supremacy featured on the monument is to see it alongside the above feature on black education. Flip through the program and you will also see advertisements for Duke Power Company as well as features on “Industrial Charlotte.” Taken together, all of this reflects the values of “The New South.”

The rural black schools featured on the left were all supported by the Julius Rosenwald Fund, which provided funds through Booker T. Washington’s Tuskegee Institute. On the right some of the “objectives” of the Rosenwald Fund are listed including:

Social relations, involving the whole problem of living together in organized society, such as economics, care of dependents, prevention of crime, and individual adjustment to group life.

Finally, there is a brief editorial about Johnson C. Smith University and the question of whether ‘It Pays To Educate the Negro.’

It turns out that it does, but only if it succeeds in “race building” and leads to a stable black community – a community that contributes to the economic advancement of the region without losing sight of its proper place within that “civilization.”

If this makes sense than it also provides a way to understand the pensions that former camp servants received by the turn of the twentieth century from former Confederate states. Those pension were awarded to individuals who could demonstrate their loyalty to their former masters and the cause for which he fought. The pension reflected vindication of their Lost Cause and also provided a model of what an upstanding black citizen should aspire to following Reconstruction and moments of racial unrest.

The U.C.V.’s program depicts the “Anglo-Saxon Civilization” of a New South, one that the veterans from the Charlotte could celebrate and that the entire community could recognize as their ultimate victory.

Next post: Why Even Now It’s Still Wrong To Vandalize Confederate Monuments

Previous post: “They Preserved the Anglo-Saxon Civilization of the South”