Update: Tweets from this session are now available on Storify. 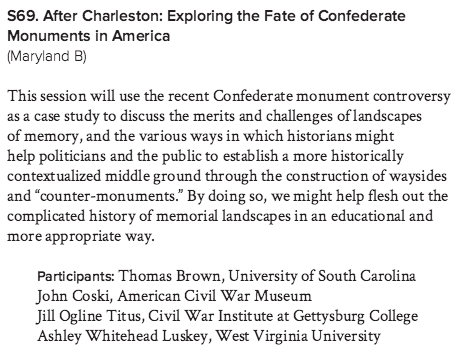 All indications are that yesterday’s panel discussion at the annual meeting of the National Council on Public History on Confederate monuments and iconography attracted a large and engaged audience. The twitter feed from the session, however, also suggests that many left feeling frustrated. What I gathered from the conversation both confirmed and helped to clarify my own position on this thorny issue.

All four panelists are experts in their respective fields and have worked closely with the general public in various capacities. However, we need to re-frame our role as public historians if we are going to have any impact on this public debate. As it stands right now, we are almost completely irrelevant. Most of the decisions having to do with removing/relocating monuments have been made with little or no input from public historians.

We are asking the wrong questions and making assumptions that tell us nothing about the public that we are trying to address. Exactly what “middle ground” is the panel description referring to? Whose middle ground and how exactly do we define “appropriate”?

Allow me to let you in on a little secret: NO ONE IS LISTENING TO US.

Yes, part of the problem is that public historians have not been sought out nearly enough, but given how we have mobilized ourselves thus far it’s not clear that communities would even know where to look for us. Unfortunately, public historians are spending their time talking about historical context, wayside markers or reminding the public that removal/relocation will not solve the underlying problems, as if we somehow possess the solutions. If only communities applied x.

This meeting was held in Baltimore, which is currently going through a long and contested discussion about the fate of its Confederate monuments, yet the NCPH chose to ignore this public? What does “public” even mean in Public History in this context?

It almost seems as if we expect the public to come to us in such crisis situations, when what is really needed, now more than ever, is for public historians to ask how they can be of service to the community. We should be doing much more listening before trotting out the same tired recommendations that fall flat to most people’s ears or completely miss the mark.

The language of context, counter-monuments, wayside markers, etc. is a poor substitute for engaging communities where they currently are in these debates and in light of their unique local histories. What we need to know is how we, as a public historians and educators, can be of service to communities in crisis. Where can we be of assistance? Finally, who are the public historians that are actively working with communities on these tough issues? We need to give them the mic.

The time for talking at audiences and the public is over.

Next post: An Opportunity for the Nau Center for Civil War History

Previous post: Earl Ijames and his “Colored Confederates” are Back