Could This Man Be Silas Chandler?

Update: Here is another sketch set during Davis’s flight from Richmond that depicts camp slaves on foot and as teamsters.

Recently I went through some old email correspondence related to my research on black Confederates. All the way back in 2011 Andy Hall emailed a link to two sketches that appeared in the Illustrated London Times from 1865. The first sketch depicts Jefferson Davis “signing acts of government” while on the run following the abandonment of Richmond in early April 1865. In the second sketch Davis “bids farewell to his escort two days before his capture.”

In both images you can clearly see African Americans, which I suspect were still present with the army as camp slaves. 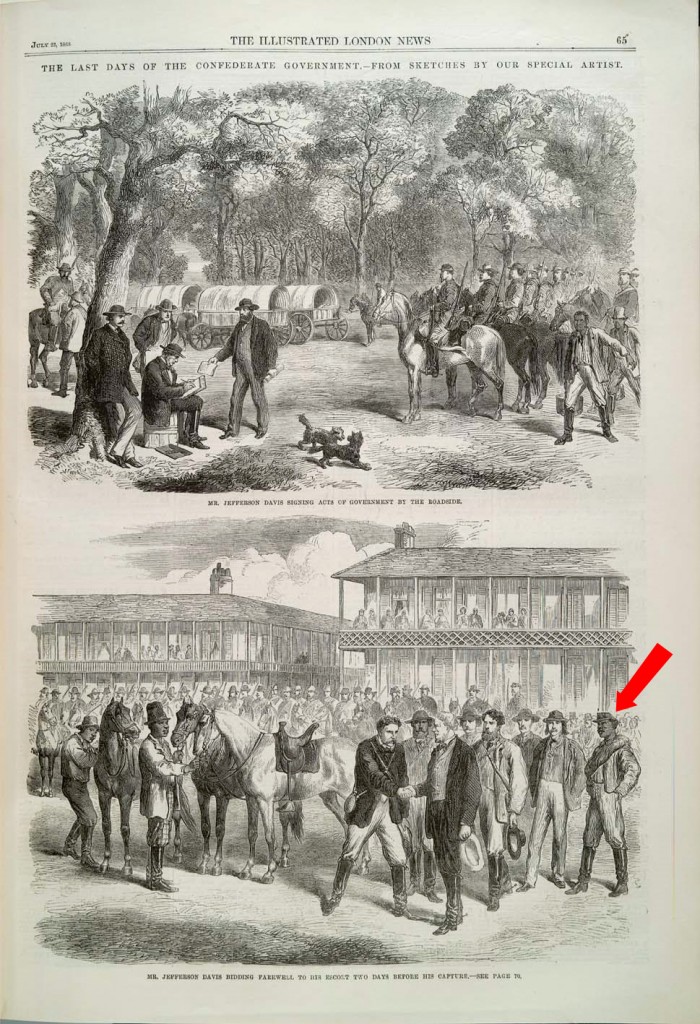 I am interested primarily in the second sketch. Popular memory of Silas Chandler remains tightly intertwined with Andrew Chandler, owing to the famous photograph of the two that was likely taken at the beginning of the war. Websites are full of undocumented accounts that suggest that the two were close friends before the war and that they functioned as equals during the war. Again, none of this is supported by the evidence. In fact, the emphasis on Silas’s connection to Andrew obscures a more interesting and revealing story.

In the final year of the war, Andrew Chandler’s injury, which he sustained at Chickamauga, kept him from the army. But Silas rejoined the war effort–this time as a servant/camp slave to Andrew’s brother, Benjamin S. Chandler. In January 1864, Chandler joined the 9th Mississippi Cavalry, the same unit that escorted President Davis to safety after Richmond was abandoned. Records show that on May 7, 1865, Benjamin Chandler’s unit separated from Davis’s group near Washington, Georgia. Davis was captured shortly thereafter.

Could this man be Silas Chandler?