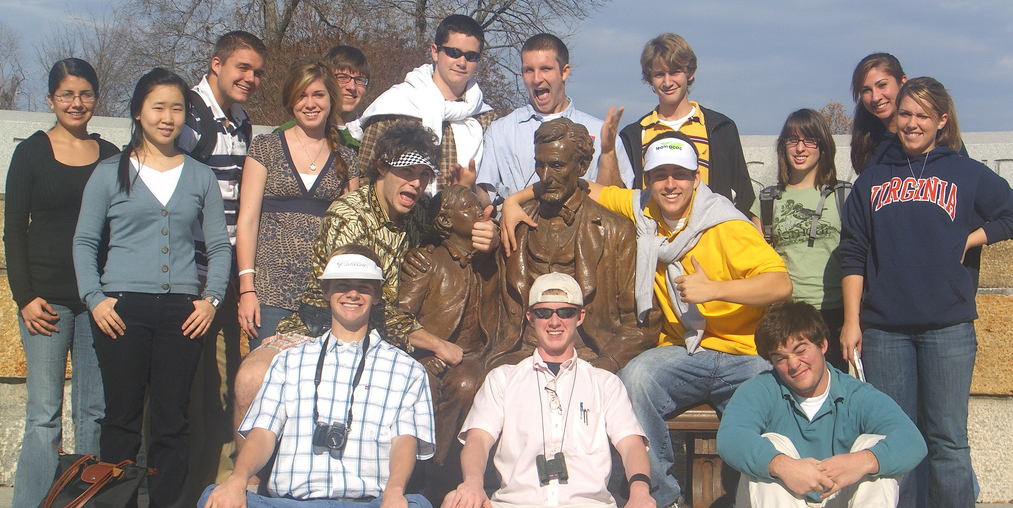 Civil War Memory Class at Tredegar in Richmond (2007) – EH has his arm around Lincoln.

Last night’s meeting of the Charlottesville City Council on the future of its Confederate monuments was well worth watching in its entirety. A number of people spoke, expressing a wide range of perspectives on the history of these sites and what should, if anything, be done. One current and two former history professors from the University of Virginia spoke as did a Robert E. Lee impersonator, who suggested that a monument to Sojourner Truth ought to be erected. Yes, you heard that right.

Susan Hathaway of the Virginia Flaggers spoke and then promptly walked out of the room, demonstrating once again that this group has absolutely no interest in engaging community members. They are content on imposing their views along with threats of erecting Confederate flags in high trafficked areas if they don’t get their way.

But the surprise of the evening was watching my former student, Elliott Harding, address the city council with an incredibly thoughtful proposal. Elliott took my courses on Civil War history and memory when I taught in Charlottesville, which included tours of the city’s Confederate monuments as well as Monument Avenue and Hollywood Cemetery in Richmond. You can read and sign a petition that Elliott organized as part of a new group that he helped found called, “Friends of Charlottesville Monuments.”

On Tuesday, March 22nd, Vice-Mayor Wes Bellamy and other supporters plan on making a formal proposal for the City of Charlottesville to remove the statue of General R.E. Lee from Lee Park. Mr. Bellamy cites his experience with several individuals who feel negatively toward the statue. “I’ve spoken with different people who have said they have refused to step foot in to that park because of what that statue and the name of that park represents. And we can’t have that in the city of Charlottesville,” he says.  Rather than tear down Lee’s statue, this petition serves as a proposal to keep it and add a statue of another leader of modern times, the late Julian Bond. Bond was an honored professor at the University of Virginia for over 20 years and member of the Charlottesville community. He impacted our area and our nation in many ways and his recent passing in 2015 makes this decision both timely and appropriate. A memorial for Mr. Bond would serve as a unique contrast to whatever legacy General Lee left on racial tensions. For many, Lee is not a symbol of racism or oppression, but it is understandable that his memory may be viewed that way. Similarly, some may not support all of the aspects of Mr. Bond’s legacy, as he was outspoken on an array of issues, but his work toward the advancement of civil rights is commendable. By converting Lee Park into Lee-Bond Park, or creating some other alternative, the City could send a clear message that history is not to be forgotten, but progress is to be celebrated. Please take this into consideration over the next few weeks when discussing any plans or proposals for Lee Park. This option may prove to be more cost effective, while unifying the community rather than dividing it. We cannot erase history, but we can memorialize how far we’ve come. Let’s erect a sharp contrast, rather than tear down our past.

The city council is planning on forming a blue ribbon commission on what to do with these sites. I do hope they consider appointing Elliott to this important group. It’s nice to know that Elliott’s passion for history continues, but more importantly it is encouraging to see a former student engaged in his community around how it remembers and commemorates its past.