I haven’t written about Earl Ijames on this blog in quite some time. The curator at the North Carolina Museum of History is notorious for his presentations and even film about what he calls “Colored Confederates” – another misnomer that distorts the legal status and role of the vast majority of black men who labored for the Confederacy during the war. A friend recently attended a symposium at the Bennett Place State Historic Site in North Carolina which featured Ijames as a speaker. Not surprisingly, Ijames continues to butcher history by arguing that Confederate army was not segregated (unlike the Union army) and that black Confederates were “real soldiers, with real muskets, shooting at Union soldiers.” This is bad enough, but one slide in particular highlights the level of confusion and ignorance of Earl Ijames.

The slide featured an image of Hawkins Carter and his pension application. The accompanying interpretation of the pension by Ijames includes the claim that Carter “enlisted in the 46th Regt. NCT in 1861” followed by an excerpt from a description of where Hawkins was during the war further down. 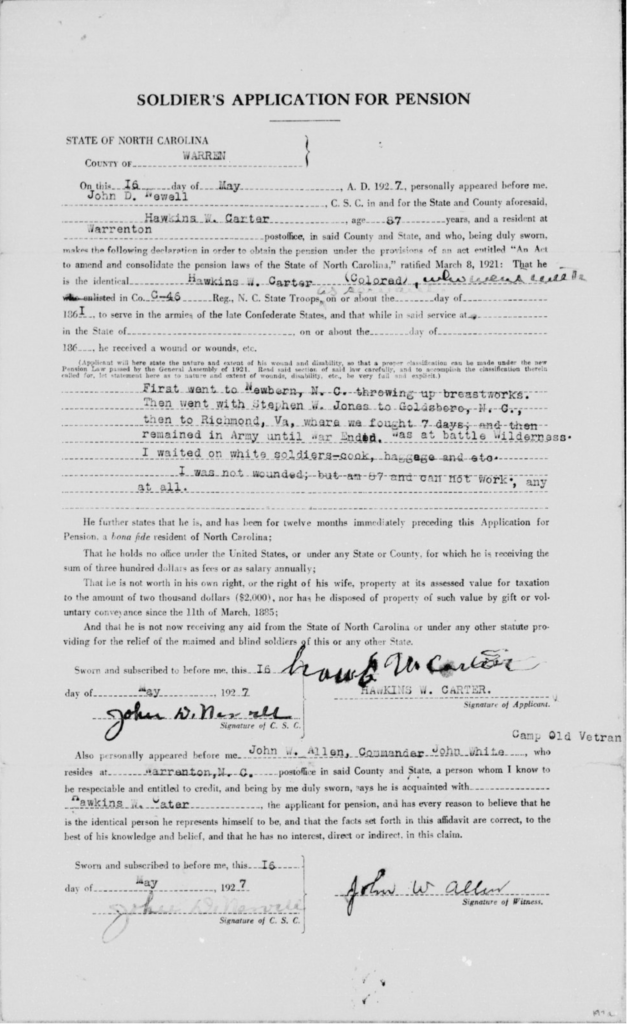 North Carolina was one of four former Confederate states in the 1920s that extended their pension programs to include former body servants or what I call camp slaves in Searching For Black Confederates. Of these four states, North Carolina chose not to use a separate pension application for this specific group. Instead they altered the one used for real soldiers. And that is exactly what they did in the case of Carter.

The word “enlisted” is clearly crossed out and in its place the words “who went with” are added. Those words were meant to denote the legal status of Carter during the war. If that wasn’t sufficiently clear, the word “servant” was added above the next line.

Hawkins Carter was not a “black Confederate” or a “Colored Confederate” and he certainly did not “enlist” in any Confederate unit during the war. He was a slave. Slaves did not enlist in the Confederate army.

Let’s be clear, this is not a difference of opinion or interpretation. We are talking about an inability to engage in the most basic analysis of a primary source and a complete lack of understanding of the relevant historical context.

It is troubling – to say the least – that Earl Ijames continues to be given a forum to spout this nonsense. As an archivist at a prominent museum, who is allowed to speak alongside real historians, Ijames is inevitably going to be seen as an authority on this subject. He is going to be believed by most people who place their trust in institutions to feature competent and trained speakers in their respective fields.

Next post: The “colored wing” of the Army of Tennessee