Why I Resigned from the Editorial Board at *Civil War History*

By now many of you have received or will soon receive the latest issue of the journal Civil War History which includes a lead article by Earl Hess titled, “The Internet and Civil War Studies.” The article suffers from a number of fundamental methodological problems that will be apparent to anyone who reads it. The article has already led to a pretty heated discussion on twitter, in part, because I announced my resignation from the editorial board.

I want there to be no question as to why I stepped down. It has very little to do with the article’s methodological problems, though I think some reflection is in order over how it made it through peer review. My concern is with a quote that appears on p. 228 in the section on social media. The author relied on responses from two surveys that asked historians about their experience with social media. One of those responses was included, which you can see below in the attached image. 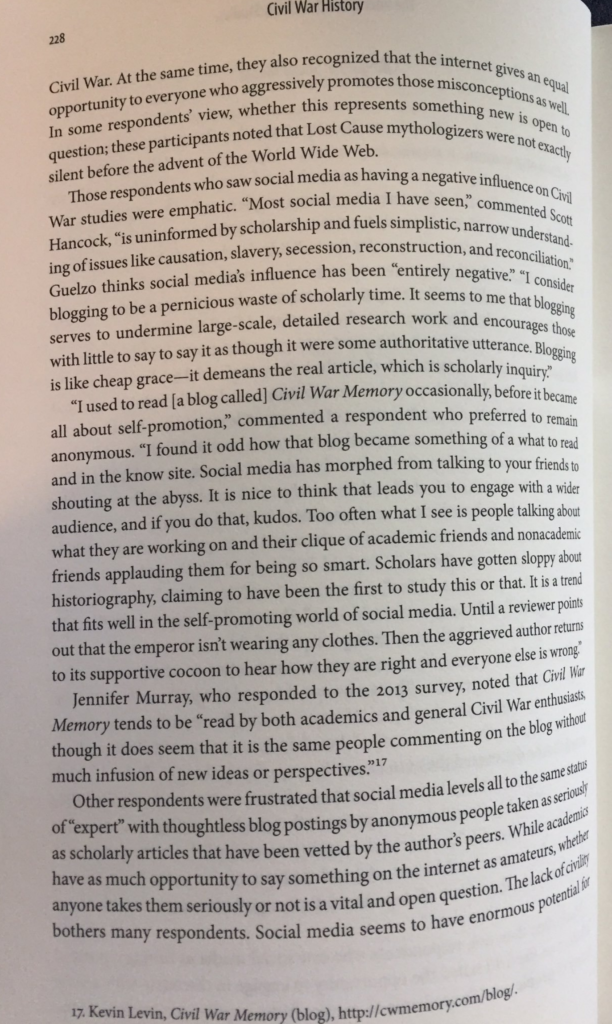 Let me be clear that I have no problem with fellow historians expressing disagreement with my scholarship. This is one of the reasons we have academic journals. That said, I fail to see how including a quote that refers to me anonymously as nothing more than a ‘self-promoter’ advances anything meaningful in the pages of this journal. Readers learn nothing about what my blog is about or how I have used it over the years to advance my goals as an educator and historian.

I am not even acknowledged as a historian in connection to my blog. Over the years I’ve explored subjects on the site that resulted in the publication of three academic books. Ultimately, it came off as little more than a cheap shot that should have been flagged by the editors.

Since when did an academic journal become a venue for character assassination? I would love to know how anyone on the editorial staff or board would feel to see themselves treated in this way. Unfortunately, neither the editor or book review editor of the journal appears to understand the difference between a legitimate scholarly disagreement and personal attack.

I was invited by the editor to write a response to the author, which I declined. As far as I am concerned, this is not a matter of debate. More to the point, historians now have other means of expressing their concerns on various matters. Ah, the irony.

In addition to stepping down from the board, I have no plans to renew my subscription to Civil War History.

Next post: Today is the Official Publication Day for *Searching for Black Confederates*

Previous post: The Legacy of Silas and Lucy Chandler