“I’m a Person of Color First. I’m a Historian Second”

Last night C-SPAN featured this recent panel discussion about Confederate monuments from last year’s Lincoln Forum that included historians Harold Holzer, Edna Medford, Elizabeth Varon, and Gary Gallagher. It’s well worth watching, but if you’ve seen a panel discussion like this you won’t learn much of anything new. That is not a criticism of the participants. They are all talented historians, who have helped the public to better understand the history and memory of these monuments.

Discussions narrowly focused on history, however, fail to address the fundamental issue that many communities are struggling with. Professor Medford captured it beautifully in her opening comment. 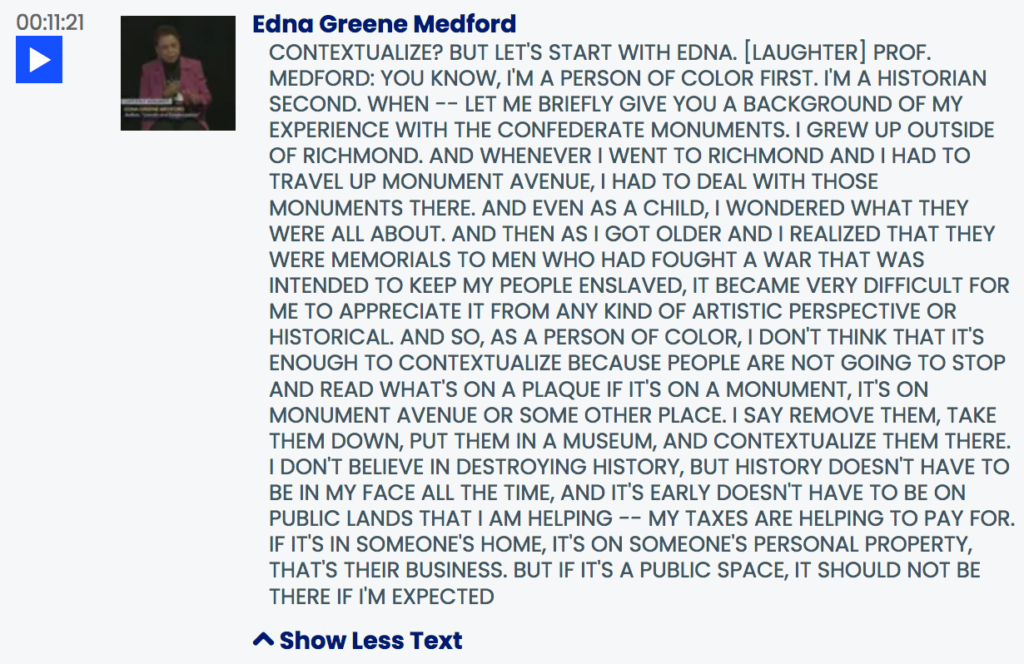 Much of the rest of the discussion shifted to the history of the monuments and the challenges of interpreting them in the current environment, but the Q&A appeared to reflect that many in the audience were interested in the implications of Medford’s opening comment.

That’s pretty much where I am in this ongoing debate. While historical knowledge is certainly relevant to this debate, ultimately it is about whether these monuments reflect the values of local communities. Medford’s comment serves as a reminder that they never reflected the values of African Americans. The only difference is that now Medford and African Americans have the right to speak out and voice the kinds of concerns that these monuments were erected to erase.

You can’t ask someone in 2020 not to do everything in his or her power to remove monuments that were intended, in part, to deny an entire race of Americans political power and maintain them indefinitely as second class citizens.

Next post: Creating the Historical Record for the Future, One Student at a Time

Previous post: Teresa Roane and Barry Isenhour on Black Confederates or How Much History Can You Butcher in 17 Minutes?