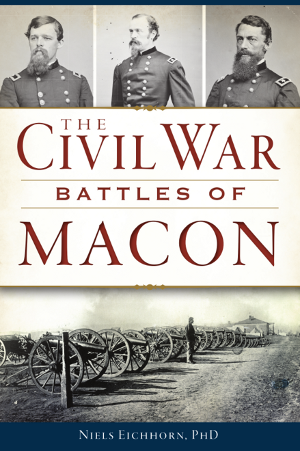 Book reviews can be tricky. You have to strike the right balance between covering its strengths and weaknesses as well as resisting the temptation to impose your own agenda onto the author. In other words, review the book that the author wrote and not the one that you would have written.

I’ve written my share of reviews over the years for academic journals and popular magazines. I take it seriously having authored and edited three books.

A couple days ago Stephen Davis published a review of Neils Eichorn’s new book on the battles around Macon, Georgia for the Emerging Civil War [ECW] blog. Davis also happens to be the book review editor for the site.

Eichorn holds a PhD in history and is the author of numerous books and articles. He is a respected scholar in the field.

Before addressing the review, let me be clear that I have not read Eichorn’s book nor do I have a problem with negative reviews if they are warranted as long as the criticisms are fair. This review is anything but fair.

In the very first sentence Davis characterizes the book as “astonishing mediocrity.” Davis takes issue with a few factual points and points of emphasis, but the brunt of the review focuses on Eichorn’s word choice.

Unfortunately, an unseemly partisanship seeps into his writing, especially when he uses such loaded terminology as ‘the War of the Rebellion,’ which was Northerners’ favored term till, decades later, Civil War came into use. He seems to prefer ‘rebellion’ over ‘Confederacy,’ and calls Southern troops “Rebels” more often than he does ‘Confederates.’ Noting how a Macon paper complimented William C. Quantrill even as it condemned Stoneman’s raiders, Eichhorn sneers, ‘While U.S. raiders were vandals, Rebel murderers were heroic individuals.’ Such sarcasm has no place in a work like this.

Davis also criticizes Eichorn for citing “Rebel twenty-two times, Confederate just three.” These types of criticisms constitute the brunt of the review. Let’s be clear, such criticisms have nothing to do with the book or the author and everything to do with Davis, who is in no position to accuse another author of “unseemly partisanship.”

One of Davis’s recent books is titled, What the Yankees Did to Us. Who exactly is “us”?

If Davis wanted to write about the ongoing conversation about word choice in connection to Civil War scholarship or the debate about Confederate monuments he should have written a separate article.

For comparative purposes consider the review of the book at the Civil War Books and Authors blog, which caters to a similar audience. The reviewer offers a clear assessment of the book’s scope and content and offers a few targeted criticisms. There is nothing insulting about it. It is written by someone who understands his role as a reviewer.

Update: Or consider Amy Greenberg’s review of Michael Burlingame’s new book about Abraham and Mary Todd Lincoln. Greenberg is very critical of the book’s central thesis, but she remains respectful of the author and of the historical process. You can do both.

In response to criticisms, Chris Mackowski, who I greatly respect, offered a defense of the decision to publish the review. Unfortunately, instead of addressing the content of the review he focused on the importance of maintaining “a community of writers with…a variety of perspectives, opinions, interests, and voices.” Of course, no one disagrees with such a sentiment, but it fails to address the issues at hand.

The issue is not censorship or the importance of maintaining a vibrant and open community of ideas, but an understanding of the role of the reviewer. On this score Davis falls far short—all the more disappointing given that he is the book review editor for ECW.

Chris has done a magnificent job of turning ECW into a platform where young authors can begin to learn how to write for a broad public audience, but this incident is a stain on the reputation of the site.

I hope no one on the ECW staff will ever be subjected to a review of their own work of this quality.

P.S.—Some of you may be wondering why I went out of my way to write this post. If you are a Civil War historian who has published a book in the last few years there is a good chance that Niels reached out to you as an editor at H-Net. Niels has reviewed and interviewed many of us. In my case, he drove two hours to Atlanta to interview me back in 2019 about Searching for Black Confederates. He reads carefully and his questions are always fair and challenging. Niels models the kind of scholarly interaction that all of us hope to achieve at our best.

Next post: Everything You Wanted to Know About the Black Confederate Myth in Less Than 10 Minutes