Reburying Nathan Bedford Forrest and the Lost Cause

Yesterday the Sons of Confederate Veterans reinterred the remains of Confederate general and Klan leader Nathan Bedford Forrest and his wife on the grounds of their headquarters and new museum at Elm Springs in Columbia, Tennessee. Forrest is the most controversial of all Confederate military leaders owing to his involvement in the slave trade, the massacre of Black Union soldiers at Fort Pillow, TN in 1864, and his involvement in the Klan following the war.

SCV members were joined by members of the Oathkeepers and Three Percenters, both far-right anti-government militia organizations that have been connected to the attempted insurrection in Washington, D.C. on January 6, 2021.

The remains of Forrest and his wife were formerly located underneath the Forrest monument in Memphis, TN, but its removal in December 2017 led the city to hand over the remains, as well as the monument, to the SCV. 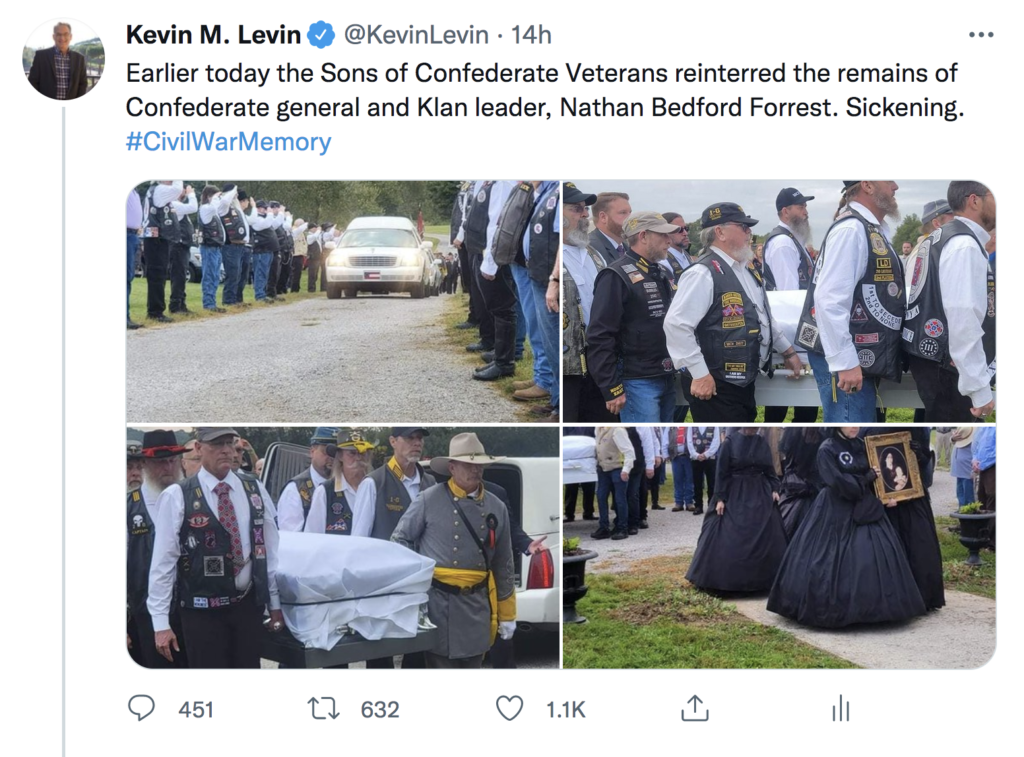 The ceremony has not received any serious media attention, but a tweet posted last night received many questions and expressions of anger and disgust in response. It’s understandable to interpret this ceremony as a clear indication of the continued popularity of the Lost Cause, but it’s worth taking a few minutes to put it in broader context.

Forrest and his wife no longer occupy a public space. Tax dollars are no longer used to maintain the monument that once marked their grave site. What took place yesterday was a literal reburying of the Lost Cause and another clear sign that Confederate memory no longer represents the collective history and values of local communities.

In fact, as Confederate monuments come down we are seeing local efforts across the country to acknowledge publicly some of the darkest periods in our nation’s history—history that the celebration of Forrest and the Confederacy helped to distort and erase.

I did a quick search and came across numerous news stories from over the past few weeks of communities dedicating new historical markers and gravestones that tell the history of local lynchings:

This is just a small sample. We are in the middle of a remarkable transformation of our monument/commemorative landscapes. It’s exciting to watch as communities struggle to re-imagine public spaces and attempt to shape them in ways that bring people together by highlighting stories that come closer to representing a shared history and shared values.

The Forrest monument and the general’s remains no longer represent the collective history and values that residents of Memphis aspire to embrace. They will do little more than rally a dwindling number of reactionaries desperate to hold on to a mythical past.

Yesterday’s ceremony at Elm Springs is just another indication that the SCV, and its continued attempt to distort the history of the Confederacy, slavery, and white supremacy, has been decisively rejected.

Next post: Remembering and Forgetting on Richmond’s Monument Avenue