“The Black Race Must Be Its Own Deliverer”

Yesterday I suggested that even though Robert Gould Shaw’s parents remained committed to the abolitionist cause in the 25 years leading up to the Civil War, the family had very little connection to the Black community in Boston and elsewhere. Robert did not share his parent’s reformist zeal, but he turned out to be the one member of the family who experienced a level of familiarity and fellowship with Black men through his brief command of the 54th MVI.

I’ve always found it difficult to teach my students that a commitment to abolitionism did not necessarily translate into a willingness to share the same public and private spaces with African Americans. We can see this in a reported incident involving Frank Shaw, while he was president of the National Freedmen’s Relief Association, which was located in New York City during the war. 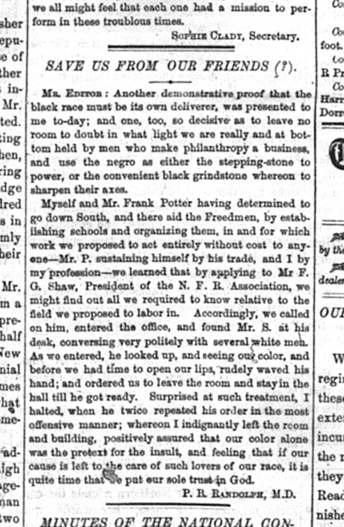 This story was published in the New York Weekly Anglo-African on November 5, 1864 and written by P.B. Randolph, M.D. [Thanks to historian Jonathan White for sending along a copy of the original article. You can also read it in historian Donald Yacovone’s collection, Freedom’s Journey. Randolph and Frank Potter visited Shaw in his office seeking information about how to establish schools in the South for former slaves. You can read about how the two men were received by Shaw for yourself.

What should we make of this account?  First, we should be careful about any conclusions we draw from it. Frank Shaw may have simply gotten up on the wrong side of the bed that day. The specific individuals in Shaw’s office and their conversation may have led to the rude reception received by Randolph and Potter. We don’t know what they were talking about even though it was reported as a ‘polite’ conversation. The two individuals may experienced Frank’s routine office behavior while at work.

It is also very possible that Shaw was taken off guard by two Black men, who apparently entered his office unannounced. Perhaps, in his mind, they had violated an unstated racial code of conduct shared by the other men sitting around the room. We know when the article was published, but we don’t know when the visit took place and how much time lapsed between the two. Shaw apparently made no attempt to contact the two men after they left to apologize and/or schedule another meeting, though it is also possible that he was unaware of their identities.

What we do know for sure is that Randolph and Potter both remained convinced that their “color alone was the pretext for the insult.” This was likely not their first such experience with the white abolitionist community. While it is not conclusive a close reading of this article, along with an understanding of the relevant historical context, supports taking the two men at their word.