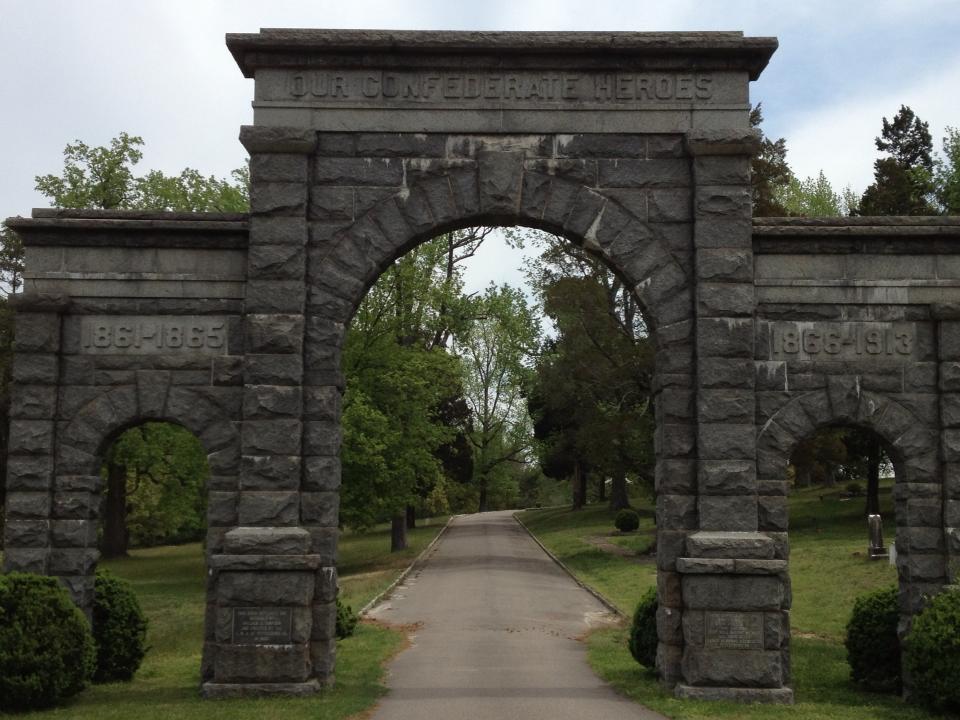 Update: Just received a private email stating that I am “incapable of feeling anything but hate for Confederate soldiers.” As always, thanks for taking the time to comment.

This weekend I was in Petersburg, where I gave a talk to a group of educators as part of teachers conference sponsored by the Civil War Trust.  I had a great time. It’s always nice to be able to catch up with my good friend, Garry Adelman, and meet new teachers.  Yesterday morning I had a chance to walk the Crater battlefield, where I got to see the incredible new view shed from the Crater back toward the guns at Fort Morton and the staging area for the battle.  After that, I headed on over to Blandford Cemetery for a quiet stroll.

I am a sucker for Blandford.  It’s not the cemetery’s importance to the battle or the fact that I can identify many of the names on the markers or even the beautiful Tiffany Windows in the church that I find so impressive.  When I walk through the arch to the Confederate section I am truly moved by what I see.  It’s a bit deceptive, especially if you have already visited the Confederate section at Hollywood Cemetery in Richmond.  Blandford doesn’t have the grandeur or sophistication of Hollywood and that is probably why I prefer this place.  You won’t find a pyramid at Blandford.  In fact, there are relatively few markers in the Confederate section, but it doesn’t take long to realize that those markers outline row upon row of unidentified Confederate soldiers buried by their respective states.  This section of the cemetery is a testament to the profound sense of grief and loss experienced by the community in the years following the war.  So many young men buried without any identification and far from home.  The monument to the unknown Confederate is perfectly positioned at the top of the ridge overlooking these men.  How can you not be touched on a deeply emotional level?

I understand the significance of Blandford to the burgeoning Lost Cause narrative of the war and I can easily fit it into other scholarly discussions/debates as well, but when I am on the ground very little of that matters to me.  There are lessons to be learned about war, sacrifice, duty, and loss.

The only item in that cemetery that can send me into a tailspin is that ridiculous marker to Richard Poplar that the SCV dedicated a few years ago and which they gather around each year to commemorate.  On a landscape littered with unidentified Confederates the very people who claim ownership of their memory found nothing wrong with placing a marker with a fabricated identity in a place that does not even include a body.  I can’t think of anything more disrespectful both to Poplar and to the unknown soldiers.

In the end, however, it’s only a temporary distraction.  Within a few minutes my mind is quiet again as I pay my respects to the unknown.