Susan Hathaway, Rob Walker Jr. and the Virginia Flaggers Have Some Explaining To Do 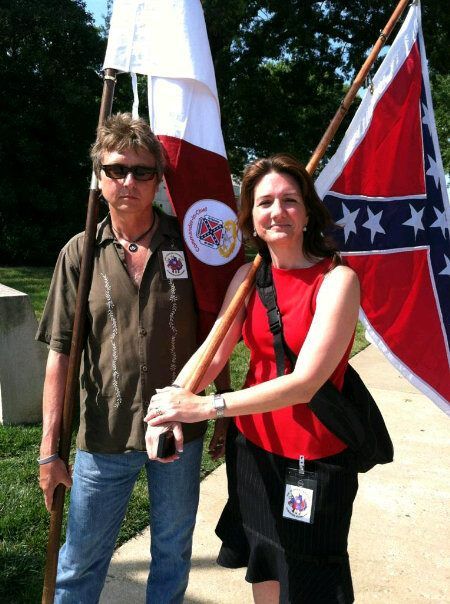 Michael Givens (SCV) and Susan Hathaway on the Boulevard in Richmond, Va.

Brooks Simpson has learned from the Richmond Police Department that there is no report related to a supposed vandalism incident that took place on Thursday at the Jefferson Davis Monument in Richmond.  According to the police: ““We can find no record of such an incident ever occurring.”  According to Hathaway’s posting, Mr. Walker called the police, so there would be a record. Given the details of the report written by Virginia Flagger, Susan Hathaway, it is safe to assume that it is doubtful that the incident took place.

It is now time for Hathaway and Walker to explain themselves.  I assume the Virginia Flaggers themselves will want an explanation given the fact that so many commented on and/or shared the story through various social media channels such as Facebook.  How embarrassing.  Here is how Hathaway explained what took place at the Davis Monument:

We do not believe there are ANY coincidences or happenstance in what has transpired since we began our work 20 months ago.  There is no denying God’s hand in this… in bringing Rob to Monument Ave. last November, and then, miraculously again last night at the exact moment and time to prevent what could have been irreparable damage to one of our most treasured monuments AND facilitating the first arrest (that we are aware of) of these punk vandals that have no regard for the rule of law:  neither God’s nor man’s. – Susan Hathaway, Virginia Flaggers

Given the religious culture of the Flaggers this may turn out to be the most offensive aspect of this whole story.  Who is going to “Restore the Honor” of the Virginia Flaggers?

You may remember that yesterday I shared a previous comment from Walker, who claimed to have only a professional interest in the Flaggers.  Not only can that claim be challenged, but I would suggest his professional reputation as a documentary filmmaker is also at risk.

The Virginia Flaggers are notorious for their attention-seeking antics.  Well, they may have achieved that goal beyond their wildest dreams.  I do hope that Susan Hathaway and others take advantage of the opportunity if the Richmond Times-Dispatch and other news outlets choose to follow up on this story.