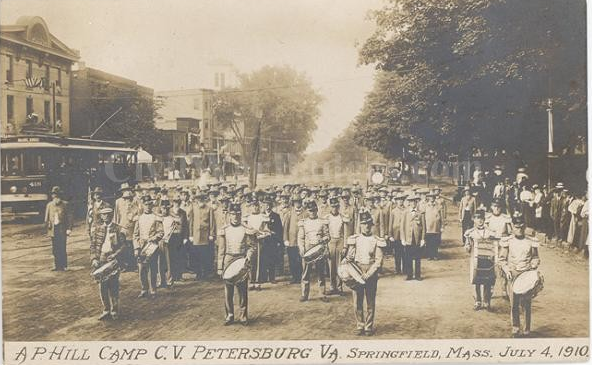 Apart from the famous reunions at Gettysburg most of our images of Confederate and Union veterans reunions took place in the South. They typically involved the dedication of a monument or an entire battlefield. What we don’t know enough about involve examples of Confederate veterans traveling north. One such example took place in 1910 when a large group of veterans from the A.P. Hill Camp in Petersburg traveled to Springfield, Massachusetts for a July 4 celebration.

Their shared experience was the battle of the Crater. Massachusetts veterans first visited the Crater in 1887 and were greeted by William Mahone and other A.P. Hill Camp members. A year after the Springfield gathering, veterans from Massachusetts dedicated a monument on the Crater battlefield.

The 90 veterans who made the trip traveled by sea to New York City and proceeded to Grand Central Station, where they were greeted with an “ovation” by the crowd. In the crowd that day was baggage handler, Michael Casey, who himself was a Confederate veteran.

Now isn’t it a grand sight to see all those fine old boys dressed up in the gray? It takes me back to war times. It makes me want to dress up again just like they are. And they are going to visit the boys in blue. That’s the proper spirit. The more we have of it the happier and better our country is going to be.

The group spent a week together in Springfield. They attended church services together and paraded as one body through the streets of Springfield. On their return Confederate veterans spent an extra three days exploring New York City.

It should be no surprise that newspaper reports offered a positive assessment of this particular reunion and stressed the themes of reconciliation as justification. It would be interesting to know a bit more about how Northerners felt about these gatherings.

Previous post: “The Enmity Between North and South Is Dead”