This is a follow up to an earlier post about the dedication of a headstone for William Mack Lee by the Sons of Confederate Veterans.

This afternoon a good friend contacted me after having looked into the claim made by William Mack Lee that he served in the 27th Virginia Infantry and as a cook for R.E. Lee. It should come as no surprise that there is no compiled service record for WML in that unit. More interesting, however, is a thorough debunking of WML’s claims of having served as R.E. Lee’s personal body servant in the September 1927 issue (p. 324) of Confederate Veteran by none other than the magazine’s editor, E.D. Pope. I encourage you to read it for yourself. 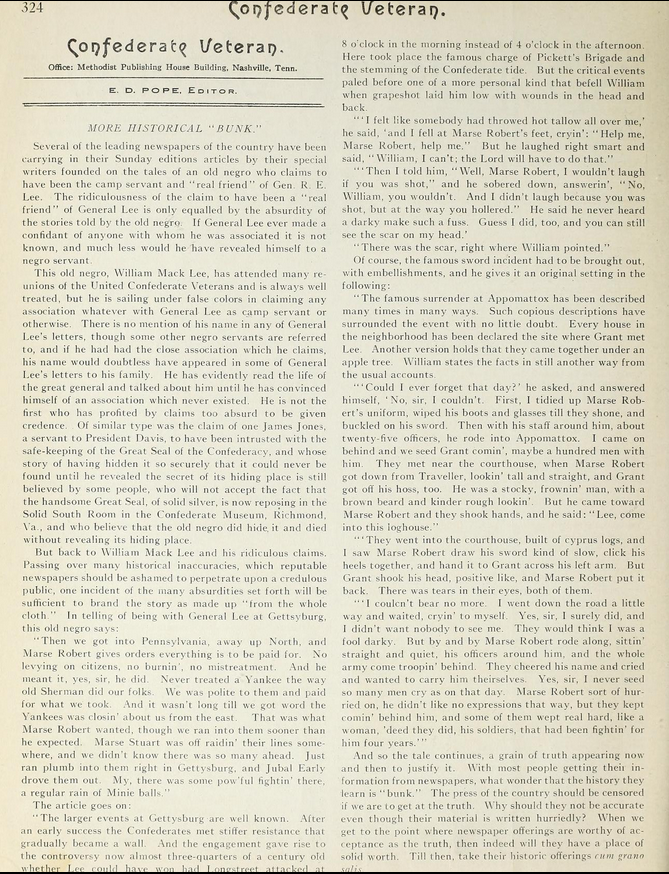 The interesting thing from my vantage point is the emphasis right at the beginning of the article on ‘debunking’ WML’s claim to have been a “real friend” of R.E. Lee. Confederate veterans and white Southerners generally welcomed those African Americans who played to the Lost Cause narrative by expressing their undying loyalty to former masters and the Confederacy, but this account points to a line that could not be crossed.

The ridiculousness of the claim to have been a ‘real friend’ of General Lee is only equaled by the absurdity of the stories told by the old negro. If General Lee ever made a confidant of anyone with whom he was associated it is not known, and much less he would have revealed himself to a negro servant. (emphasis added)

This brief reference fits into a broader picture of the relationship between Confederate veterans and former slaves during the postwar years. They did not gather at reunions and other public events as equals. White Southerners used these occasions to reinforce the racial hierarchy and demanded unquestioned compliance from their former slaves. We have already seen that former slaves such as Steve Eberhart used their roles for financial gain and it looks like WML attempted to do the same. Claiming a close relationship with Lee, however, was apparently unacceptable.

The warning to the “press of the country” about accepting stories like WML’s certainly applies to the many news outlets and social media channels today that continue to pass these stories on without any kind of fact checking.

As for the Norfolk County Grays Camp No. 1549, Sons of Confederate Veterans, who recently dedicated a headstone for WML, all I can say is that they look like complete fools. And that is putting it kindly. They are promoting a story that not even their Confederate ancestors believed.

Next post: John Hennessy on the Legacy of the Civil War

Previous post: The Making of a Black Confederate Soldier