When Your “Friends” Include Sons of Confederate Veterans

Earlier today a lawsuit was filed in Virginia challenging the recent vote of the Charlottesville City Council to relocate the Robert E. Lee monument. I don’t necessarily have a problem with a lawsuit to try and prevent the monument from being moved. The plaintiffs are residents of the community and they have every right to voice their concerns in this way.

I especially don’t have a problem given that the Friends of C’Ville Monuments is involved. They are not just interested in preservation, but in broadening the city’s commemorative landscape to include potentially new monuments. One of the trustees is a former student of mine, who has been involved in this public discussion from the beginning. It seems to me that his heart is in the right place.

I am, however, concerned that this lawsuit places the Friends in a somewhat compromising position given the presence of the Virginia Division, Sons of Confederate Veterans. 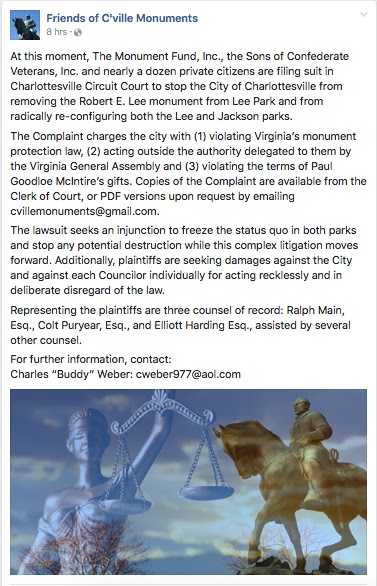 But that is just the beginning. Anyone who has followed the SCV over the years knows that they have done more than any other organization to distort the history of the war and spread any number of myths, including that of black Confederates. Members of the Virginia Division are also involved with the Virginia Flaggers and other more questionable organizations.

I do hope that as this case moves forward the Friends of C’Ville Monuments will be careful about how they associate with the SCV.

Not all heritage organizations are equal.

Next post: When at Gettysburg Remember to Turn Around

Previous post: Explore the History of Reconstruction in Washington, D.C.