Lee for Sale at Mount Vernon? 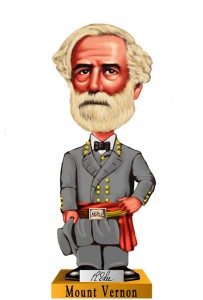 One of my readers came across this little item in the Mount Vernon gift shop.  He thought it would make for a wonderful Hanukkah present for me and I couldn’t agree more.  It’s never too early to think about showing your appreciation for your favorite Civil War blogger.  At first I was confused as to why Mount Vernon would offer for sale a Lee bobblehead.  Well, maybe not too confused.  So, what’s the connection?  According to the description on the bobblehead box:

Robert Edward Lee, a West Point graduate, was the first to graduate with no demerits during his four years at the Academy. After his graduation he married Mary Custis, the daughter of George Washington Parke Custis. As a General of the Confederate Army his achievements won him a high place amongst the great generals of history. Even after his surrender to General Grant, he was an example of how southern gentlemen should behave by taking action to rebuild the south and urging on his own people to accept the new conditions of the nation. This boxed Robert E. Lee Bobblehead is made of resin and is approximately 7.6” tall.

That’s not very helpful since the supposed connection between Washington and Lee is thought to have been much more substantial.  I thought it might be an opportune moment to recycle an old post on just this question.  The following was posted last May as I was finishing up Elizabeth Brown Pryor’s Reading the Man: A Portrait of Robert E. Lee Through His Private Letters (Viking 2007).  This book is a must read.

One of the early chapters in Pryor’s book deals with the supposed influence of Washington’s memory on Lee’s life.  Most of us take it for granted that Lee idolized the first president and even some historians have assumed a “mystical bond between the two men.”  Pryor argues that most of these stories surfaced following the Civil War as part of a broader push on the part of white Southerners to justify secession and connect the Confederate experience to the “untarnished greatness” of Washington.  Of course there is a great deal of history to work with in forging this connection given Lee’s marriage and his early years which were spent in large part at Arlington and in the shadow of Washington’s memory.  Pryor does not ignore any of this evidence, in fact she agrees that the memory of Washington did play a role in shaping Lee’s career and personal behavior.

Readers will appreciate Pryor’s attention to detail, especially in her grasp of the relevant secondary sources.  She does not attempt to build a strawman argument here, but cites directly those historians who have pushed this connection to the extreme.  The best place to start is with D.S. Freeman’s excellent biography of Lee:

His ideals had their embodiment, for unconsciously he was a hero-worshipper. He viewed his father not as “Light-Horse Harry” was in the tragic years of his speculation, but as he might have been if the promise of his Revolutionary record had been fulfilled. Above his father and every other man he had always placed Washington. The Father of his Country was no mere historical figure to him, great but impersonal and indistinct. Through Lee’s long years of association with Mr. Custis, who knew Washington better than did any man alive in 1850, Washington was as real to him as if the majestic Virginian had stepped down nightly from the canvas at Arlington and had talked reminiscently with the family about the birth of an earlier revolution. Daily, for almost thirty years, whenever Lee had been at home, his environment had been a constant suggestion of the same ideal. He had come to view duty as Washington did, to act as he thought Washington would, and even, perhaps, to emulate the grave, self-contained courtesy of the great American rebel. The modesty of his nature doubtless kept Lee now from drawing the very obvious analogy between his situation and that of Washington in 1775, but the influence and the ideal were deep in his soul. He would not have shaped such a question, even in his own mind, but those who knew him as the inheritor of the Mount Vernon tradition must have asked if he was destined to be the Washington of the South’s war for independence. [Interestingly Freeman does not cite any sources for this claim.]

More recently, Pryor references Richard McClaslin’s book-length study, Lee in the Shadow of Washington.  Most of the following commentary can be found in Pryor’s endnotes.  McClaslin’s evidence includes letters from Lee’s father on paternal guidance, but they do not mention Washington and there is no evidence that Lee ever read them.  In addition, McClaslin cites Henry Lee’s memoirs, but again there is no evidence that he actually read it until after the Civil War or if he did that it had any influence.  (fn60, p. 497)  Additional footnotes further challenge claims made by McClaslin in reference to the Mexican War and Lee’s decision to continue to improve Arlington for the purposes of displaying Washington relics.  In the case of the latter, Lee did indeed add a parlor room in 1855, but the room was filled with Lee family portraits and other items.

One of Pryor’s guiding interpretive assumptions is that our understanding of Lee’s personal side is based on little documentary evidence.  We have yet to collect all of his correspondence and while collections of wartime correspondence are available much of the rest of what we believe about Lee is based on fragmentary evidence – especially his early years.  In the case of Washington’s supposed influence on Lee, Pryor concludes with the following:

In ten thousand letter pages Robert Lee mentions Washington fewer than two dozen times.  He remarks on the public’s interest in its leader; mentions that he looked over a popular biography was sent to him by a friend; notes that celebration of his birthday.  Most of these comments are quite casual.  In his most enthusiastic writing on the subject, Lee, like others of his day, points to Washington’s wisdom and integrity, and particularly praises his valedictory address to the American people, which, ironically, cautioned against growing sectionalism.  But even in his most fulsome expression, the remarks are general, steeped in the national pride of the day, rather than personal feelings.  Never does Lee say he idolizes Washington, or that he hopes to emulate him.  The closest Lee came to a conscious association was after the war, when he struggled to come to terms with his decision to join the Confederate cause, and cites Washington’s change from British to American allegiance as an example of an earlier crisis of loyalty.  But this was after the fact.  During those terrible days of 1861 he used Washington’s name quite differently–as justification for maintaining Union. (p. 52)

I think it is important to remind the reader once again that Pryor is not arguing that memory of Washington did not influence Lee, but that the extent of that influence suggested by historians and other commentators is not borne out in the primary source material that is currently available.

Previous post: Getting Right With Lincoln or Getting Lincoln Right