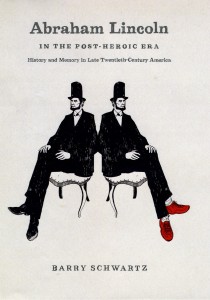 Ihighly recommend Barry Schwartz’s new book, Abraham Lincoln in the Post-Heroic Era: History and Memory in Late Twentieth-Century America (University of Chicago Press, 2009).  There is an interesting section on the image of Lincoln during the Depression, which is a moment where, according to Schwartz his reputation had peaked only to decline following WWII.  Schwartz not only surveys popular or institutional representations of Lincoln, but also tries to uncover the views of ordinary Americans.  One of the more interesting sections is his analysis of how white Southerners viewed Lincoln from the turn of the twentieth century through the New Deal.  Along the way, Schwartz mentions Thomas Dixon, D.W. Griffith, and Mary R.S. Andrews and a host of lesser-known writers.

I learned that on February 12, 1928, the Virginia House of Delegates rose for the first time in respect for Lincoln’s memory and adjourned “in honor of…the martyred President of the United States, whose death was a distinct blow to the South, resulting in a national calamity.”  Not surprisingly, a number of public figures, including Lyon G. Tyler (son of of the president) and Reverend Giles B. Cook (Lee’s staff) offered a request to “to Repeal the Resolution of respect for Abraham Lincoln, the Barbarian…” and an eleven-page resolution.  At least one newspaper editor encouraged its readers to “put aside old animosities.”

What I found most interesting was a 1929 survey of 4,658 boys and girls in Alabama living in Mobile, Montgomery, and Birmingham done by David Spence Hill.  Hill asked the following: Of all persons whom you have heard, or read about, or seen, whom would you most care to be like or resemble”?  One third of the boys and 60% of the girls named a relative or personal acquaintance; however, when it came to historic and public figures their answers were quite telling.  Of the boys, 26% chose Washington while both Abraham Lincoln and Robert E. Lee came away with 5% each.  The girls also overwhelmingly chose Washington, but Lincoln earned 3% while Lee only earned 2%.  Schwartz’s analysis of the data is worth repeating in full:

Leave a Reply to JimCancel reply