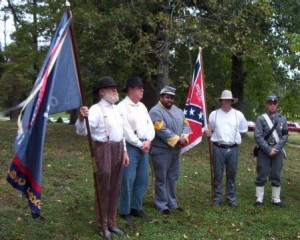 Update From Professor Sharon Hepburn: Before things get out of hand, I need to clarify things since this is completely unintentional. It seems my mistake was to write the abstract too quickly without proofreading it adequately. There should have been a qualification along the lines of “some claim it is likely that thousands…” This is not my primary field of research, just meant to be a community talk regarding general black participation in the war. I was asked to discusss African Americans in the Confederacy–which encompasses a great deal of different kinds of service. Since I do not research this particular topic I personally cannot make any claim as to the numbers and did not mean to. This is not even a field of research I plan on pursuing. My current research is on the 102nd USCT, a Union regiment, but I was asked to say some things about blacks and the CSA. Most of what I discuss is body servants, impressed slaves, etc., not soldiers per se. I apologize for any miscommunication or confusion in this matter.

From the 4th Grade we head on over to Radford University, where Dr. Sharon A. Roger Hepburn, Chair and Professor of History is scheduled to give a public address titled, “African American Confederates” at the Radford Public Library.  The talk is being sponsored by the Radford Heritage Foundation and Sun Trust.  Here is the description:

Just as African Americans aided both the Patriots and the Loyalists during the American Revolution, they supported and fought for both the Union and Confederacy during the American Civil War. The Confederate States of America benefited from its slave population throughout the war. Most cooks in the Confederate army were slaves. The Confederate army used slave teamsters, mechanics, hospital attendants, ambulance drivers, and common laborers. Slaves constructed most Confederate fortifications. Wealthy slave owners often went to war with their body servants who kept their quarters clean, cooked for them, washed their uniforms, and performed other menial duties. While most of this work was extracted involuntarily through coercion, there were African Americans throughout the south who willingly supported the Confederate States of America in various ways, including fighting for them. Although the exact numbers are widely disputed, it seems likely that several thousand African Americans provided military service to the Confederate army. Join Dr. Sharon A. Roger Hepburn, Chair and Professor of History at Radford University, to learn more about the various ways in which African Americans played a vital role for the CSA. Sponsored by the Radford Heritage Foundation and SunTrust. For more information, contact Scott Gardner, 540 731 5031

As I read through this for the first time I thought to myself that perhaps the general public will be treated to a thorough examination of how the Confederate war effort utilized slave labor in various forms.  In other words, the first part of this description is spot on, but the claim that several thousand African Americans provided military service to the Confederate army sticks out like a sore thumb.  This wouldn’t bother me so much if we were talking about Earl Ijames, but Professor Hepburn is a trained historian.  Now, it could be the case that Hepburn did not author the above description.  Hepburn is the author of Crossing the Border: A Free Black Community in Canada

(University of Illinois Press, 2007) so it is clear that she understands the research process and probably did not rely on an Online search for her information as in the case of our 4th Grade History textbook author.

What I would like to know is what is the evidence (primary or secondary sources) that supports such a claim?  I am familiar with the relevant scholarly research on this and related subjects and I am confident in stating that there is absolutely no evidence that would support such a claim.