As many of you know there are certain people that are not allowed to comment on this site.  You are free to disagree with what I write here, but I expect that you do so in a respectful manner.  This is my personal website and I set the rules.  You are free to use your language of choice on other websites or on your own.  Now, it seems that I may have been too quick to dismiss a comment that I thought had been authored by an individual who is banned from commenting on this site.  More on why I believed this later, but first I give you Mr. Carl Roden’s version of the events in question.

The last thing I want to do is alienate a young adult who expresses an interest in American history.  I’ve spent the past 12 years working to make history both exciting and relevant to high school aged students.  With this in mind I want to offer a sincere apology to young Amanda.  I encourage you to share your ideas on this site in the future if you are moved to do so.

Two things before I close: First, let me suggest that you change your email identification to something other than dixibytch.  It is not fitting for a young Georgia girl.  And I wonder if you can explain why your comment and that of Mr. Roden, who has been banned from this site, have the same IP Address?  I found it strange that your first and only comment on this blog, which references Mr. Roden specifically, includes the same IP address.

Well, I am sure that it was just a coincidence, but I truly hope that you understand why your comment was edited.  Best of luck with the second half of the school year.

Update: Dear Amanda, — It appears that the post in question was deleted from the Southern Heritage Preservation Group’s page, but just to show how sincere I am in my apology I include two screenshots below.  Here is a link to the edited comment.  Looks like Amanda gets around. 🙂 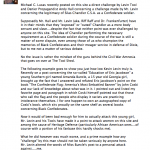 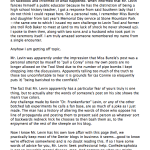