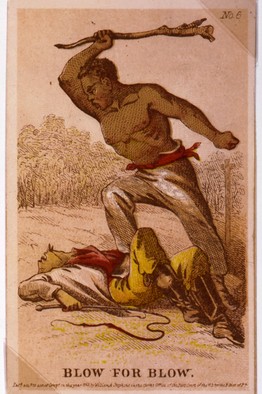 Like many of you I was sad to hear of the passing of historian Eugene Genovese earlier today.  I was never formally introduced to the historiography of slavery in graduate school; rather, I relied on various friends and other contacts to point me in the direction of important studies as my interests both widened and deepened.  Genovese’s name continued to appear and it was just a matter of time before I read Roll, Jordan, Roll: The World the Slaves Made

.  It took me a long time to read it and even longer to begin to understand it.  I find myself continually going back to it to review sections and even individual sentences.

More recently, I’ve been reading and contemplating his most recent book, Fatal Self-Deception: Slaveholding Paternalism in the Old South, which explores the intellectual world of slaveholders during the antebellum period and through the war.  The book briefly explores the slave enlistment debate and Genovese even offers a few thoughts specifically about camp servants, which is my current research topic.  The following sentence is one that I’ve been struggling with for weeks.  It beautifully captures the complexity of the slave – master relationship in the midst of war.

Body servants may have had as strong a desire for freedom as other slaves, but their fidelity to particular masters cannot be gainsaid. (p. 141)

Genovese forces us to acknowledge that freedom and fidelity were not mutually exclusive desires among this particular group of slaves.  Both the modern day Lost Cause apologists and those who would deny any feelings of loyalty harbored by slaves cling to a one-dimensional view.  The interesting question for me is how camp servant and master negotiated the dangers of camp life, march, and battle and how that resulted in a certain set of expectations between the two and a great deal of disappointment specifically for the slavemaster as the war progressed.

He will be missed.