Shouting ‘Heritage, Not Hate’ in the Streets of Prague

Yesterday my wife and I returned from a ten-day trip to Europe that included stops in Vienna, Prague, and Frankfurt. I love traveling through Europe and having the opportunity to absorb myself in its rich history. This trip was no exception, though I have to admit that I never completely disengaged myself from events surrounding the Confederate flag. I followed the news closely and read a good deal of blog posts and other commentary. The news of the lowering of the flag in Columbia was covered in many European newspapers.

As always my trips overseas provide fresh perspective on my favorite historical subject. Our time in Prague proved to be an eye opening experience on so many levels. The city is overwhelming from its sheer beauty to its rich cultural history. In Germany I can’t help but think and read about WWII. In Prague it was the Soviet occupation, life under communism and the painful transition to democracy by the early 1990s. I was curious as to how the Czech people remember communism in public spaces. In Prague, at least, they don’t.

The monuments have been taken down many of which have been moved to museums like the Museum of Communism, which we visited. It should come as no surprise that our visit left an impression on how I think about the ongoing debate about the place of Confederate monuments in public spaces.  In fact, it was unsettling.

My position on Confederate monuments has always been grounded in my role as an educator and historian. To me they are places that allow students to interpret not just the past, but about how different generations remember the past. Their presence is a statement that the past – even the painful episodes – cannot and ought not to be forgotten by the community. Better to add to the commemorative landscapes of places like Richmond’s Monument Avenue and a host of other places throughout the nation. 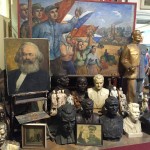 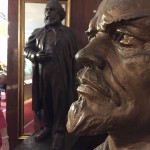 But there I was staring at massive statues of Lenin, Marx, Stalin and a slew of minor public officials. All of them had been taken down and were now on display in a museum. I tried to imagine how I might make my case to the Czech people for their continued presence in the city squares, on and inside public buildings and along main avenues. Could I even think about twisting the history into a neat and meaningless slogan such as, “Heritage, Not Hate”?

These were not simply inanimate objects made of cast iron and bronze. They helped to prop up a state committed to an ideology of hate and oppression. Many individuals lost their lives in its name.

Is anyone surprised that the Czech people removed these monument, not in the name of erasing their history but in by filling their public spaces in ways that reflect the decisive change in collective values that came with the fall of communism? Was there ever a serious alternative?

I’ve always looked at this issue from a perspective of detachment, but as I continue to reflect I can feel the ground shifting under my feet. Monuments are never erected as merely an exercise in history. They are intended to legitimize a set of values. When they are on public ground they necessarily represent the views of the state and by default welcome one group of people while turning away others.

Upon landing yesterday I read that city officials in Memphis are still debating whether to remove a monument to Nathan Bedford Forrest, along with his remains, to a new location. Yesterday was also Nathan Bedford Forrest Day in Tennessee. I’ve read a number of thoughtful commentaries that make the case for preserving Confederate monuments or that attempt to distinguish between different types of monuments. Perhaps there is a way to distinguish between the Forrest Monument and the hundreds of monuments to Confederate soldiers that dot public spaces, including some of the most visible ground in front of local courthouses.

Although I still see great value in having Confederate monuments available as a historian and educator in their intended settings, I do not believe that such views necessarily trump those who perceive them, along with the Confederate flag, as part of a lived memory of political oppression.

We can fine tune distinctions concerning how Americans identify with the Confederate flag and Confederate heritage all we want, but it can never overshadow the fact that the success of the very people memorialized in bronze and marble would have resulted in nothing less than a brand new slaveholding republic built on white supremacy. This, for me, must be the starting point in any discussion concerning flags and monuments.

Ultimately, and as I’ve said all along, it is up to the people in each community to debate these issues in public forums and through their elected officials. Many of the people now engaged in these discussions were, at one time, barred from taking part in the political process based on an ideology that these very same monuments were erected to reinforce.

Monuments can do that.

The people of Prague knew that all too well.

Previous post: When a Monument To John C. Calhoun Was Torn Down